The Art of Diplomacy 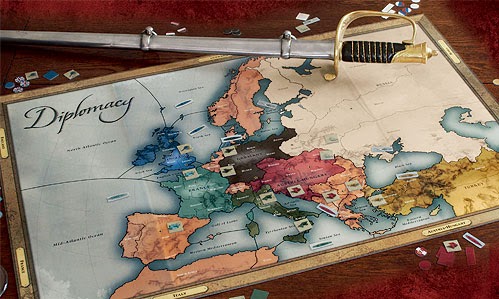 This is a guest blog post by Mike Webb of Alliance Game Distributors, about the game Diplomacy and how it relates to business. This is part of a series of Kickstarter sponsored posts that are helping us expand our store. If you're a local Diplomacy fan, you should check out the August Double Con hosted by the Bay Area Diplomacy Association on August 23rd.

Everything I Really Needed to Know About Business I Learned From GamingHi. I’m not Gary Ray, but I play him on the internet. My name is Mike Webb, and I am Vice President of Marketing and Data Services at Alliance Game Distributors and in charge of the publication of Game Trade Magazine.

I have been a gamer since the late 70’s, and although I have had the pleasure of working in the hobby game industry professionally for the last 17 plus years. Before that I was a regional manager for a print shop and computer services chain in Tennessee, and before that I managed hotels. Gaming has informed many of my professional choices and my management style.

In fact, 3 games in particular have made a major impact on me professionally even outside the game biz – Diplomacy, Risk, and Dungeons & Dragons. Diplomacy in particular was important in forming job related skill, as it taught me very basic principles that apply in business as well as in international relations.

How to Work With Others to Build Consensus

Okay, Diplomacy is a classic, but it is not everyone’s favorite because it is not a test of who is the best strategist in a vacuum. No, it is a test of who is the best at building consensus and offering others something they want and need while furthering your own cause as well. You simply cannot win without the help of others, so you learn early to build common cause with your competitors in order to rely on their aid in certain situations. This manifests in business a number of ways. Game retailers operating in the same market with the same product selection may seem to only be competitors in one sense, but they are in fact engaged together in the marketing of games as an entertainment alternative against purveyors of other entertainment products and services. Retailers in the same area can work together to create compelling and good-natured league play and competitive events, bringing in a larger pool of resources for them to compete for. It can be a win/win.

When I work with a competitor toward a common goal, I also create goodwill that is visible to the community. Recently, a retailer in the Northeast did not receive product for a major prerelease event. Other retailers in the area – all of whom were technically competing for the same dollars – pooled together extra product they had and sent it to that store so they could also run the event. The community was happy to see such common ground among the stores, and I credit actions like this one with the strength of the gaming community in that area.

Obviously, this cooperation cannot cross the line into collusion – some areas of cooperation are off limits. But working together to build community, to build (friendly) rivalries and to help each other so you both get ahead? That is a winning strategy in business.

Richard Sharp famously wrote in The Game of Diplomacy, “The events on the board can be exciting enough at the time; but it is away from the board, during the fifteen minutes or so of negotiating time, that the game is decided. “ This is true in business as well as the game.

We hear a lot in the business and in life about someone being a Sore Loser – and no doubt you have seen your share in life. These are people who can suck the fun out of any activity. They are often the most competitive, and certainly some good can come from focusing so much energy on new and innovative strategies. But in the end, a Sore Loser blames things outside of his or her control for the failure of the plan – and in so doing often make other wish they had not played together. This is especially true in Diplomacy, where loss is just part of the game and where despite it seeming like someone is your ally, they are playing first for themselves. Again, quoting Richard Sharp’s excellent book (and much like Go Rin No Sho and Art of War, one that belongs on every business bookshelf if you ask me) – “Few players will actually say in as many words, ‘You -let me down in our last game, so I’m out to get you this time.’ But it’s a common enough attitude. It seems to me to indicate a fundamental immaturity of outlook; good players treat each game as a new beginning, and though they will remember previous accidents and not be caught napping again, they will not bear grudges.”

You see, those were the rules to begin with – we sat down to play a game, and in the end I am first and foremost trying to win. Don’t be surprised by that as the game comes to an end. We may both want to push the Austrian player out of Burgandy, and so we may work together on that. But in the end, I am trying to win and so are you. While I maintain that we can have great cooperation among stores (or hotels, or whatever business sector you may be in), we need to recognize individual goals are out there as well. Don’t take it personally if someone outplays you – in fact take it as a reason to sharpen your own skill set and to come back to play again. No one wants to play with a Sore Loser – but if I can lose and compliment you on your play while adapting my strategy to the new reality? Then I stand to win as well. And chances are you will come back to the table to play with me again.

How to be a Gracious Winner

This is the flipside of the above, but it bears mentioning. In far too many businesses I see local or regional competitors – people who have so much in common that they could be working towards – getting caught up in unprofitable competition. Winning becomes everything, and so often winning is not defined as anything other than crushing the enemy. Profitability is secondary to “winning”. Sustainability is secondary. Creating new customer base is secondary. And so often the winner can become so insufferably smug, that people outside the game walk away from the table. Customers see the vicious competition between two stores or two manufacturers and decide they would rather take their money a completely different direction.

Be as gracious in victory as you are in defeat. Congratulate others in the game on their good play. Adapt their strategies that worked, and tell them that you found those compelling. Give credit where it is due, and don’t pat yourself on the back too hard.  Which brings us to:
The Arrogant Points-Leader Gives His Competitors Common Cause – and a Big Target

Invariably in any group that plays Diplomacy, you will find that one player who thinks they cracked the code on the strategy. Big heads and bigger words follow – and suddenly that player finds people unwilling to work towards common goals – even when those goals visibly benefit both players. This happens all too often in business. And is a big reason why working with others in your play space towards common goals and consensus are so very powerful. Make your business one that the competitors know and respect by being someone they can work with.

Good luck, and above all Enjoy the Game!