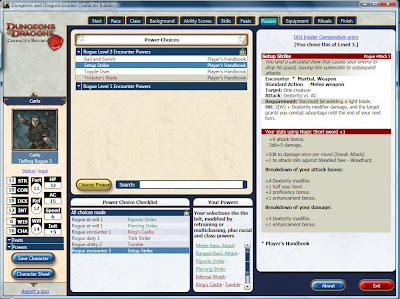 I acquired a beta copy of the D&D Character Builder yesterday (I'm not a beta tester). It's a closed beta, which is a shame, since it would make the D&D Insider program worth the money. Playing around with it this morning, I was able to make a character in about ten minutes. The program is well laid out, with a full description of every power in the exact format as it appears in the Player's Handbook. It's intuitive as well, probably an evolutionary step beyond the character builder from Lone Wolf, and far better than E-tools (and don't get me started on the collaborative disaster that is PC-Gen). For example, whenever you select a potential power, it gives you your overall combat bonuses with that ability on the bottom right. This is what a lot of us want to know, and I know from experience, I used to do a lot of clicking back and forth to see the end result with past programs.

Installation of the program took a while, as it had to install the dot-net framework on my Vista machine (something I avoid). It's a full, stand alone application, not a web based program. It worked fine after the reboot from the installation and didn't require any fiddling with additional files. The program is PC only, which is a reason why I got to take a look. The rightful beta tester had a Mac and wanted to see it in action.

The program features content from the Player's Handbook, along with options to play a limited number of races described in the Monster Manual as potential PC races. It also included content from Dragon magazine, including an interesting option for bonus skills based on character backgrounds. Like past programs of its type, you can choose to de-select source materials to limit your options. There is a section for adding house rules, but it appeared to be an import function. I'm not sure how that works. The program in its current form only goes up to 3rd level. The character sheet output appears to be the same as the standard D&D character sheets, which is somewhat important. Output is where a lot of these programs fall on their faces.

What I'm waiting for now is an encounter design tool. I created my first encounter for D&D 4 last week and it was painful. It involved doing the math first, to get the right mix, then coming up with the right combination. Following this, if I wanted an NPC with powers, I had to make some guesses on what was appropriate, as NPCs are not guys with PC classes anymore. Once I selected what was appropriate, a guess for the most part, according to the DMG, I ended up photocopying various pages of powers and feats out of the PHB, so I could have them handy. What would have been a two page encounter in a D&D adventure was a seven page booklet. Lets hope that tool eventually makes it into the D&D Insider program. Better yet, find a way to integrate NPC design into this tool. Anyway, I would gladly pay the subscription fee when the character builder is available.
Posted by Gary Ray at Tuesday, November 11, 2008