My Take on WizKids

I'm no fan of the kids, but that's mostly because I've experienced them on their decline, rather than in their heyday of plasticy goodness. Big profit games like Mage Knight, HeroClix, MechWarrior and the mega hit Pirates of the Spanish Main were all on the decline when I opened my store in 2004. Pirates had a slower decline than the others, but the ship was still going down. All of those hot games have seen a steady decline or have been discontinued since we opened.

The bigger problem with Wizkids was their relentless and ultimately unsuccessful struggle to replicate their successes. With such big hits, it's easy to forget the many dogs: MLB Sportsclix (both attempts), Toonclix, HorrorClix, Haloclix (can we just say *.clix?), the Battlestar Galactica card game, Star Wars Pocketmodel, NASCAR Race Day, Rocketman, and the board game called Oshi. I'm the owner of the wall that Wizkids threw crap against to see if it would stick. Nothing stuck and here we are.

That said, I'm a little disappointed to see the plug pulled this week by parent company, Topps. Pirates is a game that sells alright for us, and I'm still hoping to get some ship in the bottle product next month. Tsuro is a solid board game, although Oshi was not the hit followup they intended. I was especially indignant that the photo of the game on the box cover didn't match the product inside. Other than these, there's not much else that sells for us. Heroclix was never too strong for us, mostly because we were so close to Flying Colors at our last location, the excellent comic book store in Walnut Creek. We went from half a dozen cases of a new clix release, to two cases, to one case, and finally, with the latest release, four boosters. Why bother? Heroclix is an iconic brand that's hard to ignore. It would be like not carrying D&D. That said, I'm glad not to have to be a standard bearer for the dying brand.

The significance of the demise of WizKids, I think, is what it might mean for distributor exclusives. The big industry issue with this company is that they trail blazed the path for manufacturers to create exclusive deals with the industry distribution powerhouse, Alliance. You can only buy WizKids products through Alliance, which was a major blow for the other, smaller distributors, and an ominous sign for the industry. Alliance doesn't play nice, and as you might know, it's the tiny child company of the mindless monopolistic comic book distribution machine known as Diamond Comics. The last thing the industry needs is the Diamond of game distributors, which is what everyone feared Alliance would become in a monopoly position.

Everyone would like to claim a cause and effect relationship with WizKids demise after going exclusive with Alliance, but it's not there yet. However, you start to wonder, especially after companies like Days of Wonder go exclusive and then start farming out their games to other companies to produce. Is going exclusive an act of desperation? Sure, there's no proof of this, but if there's a growing perception that this is the case, many retailers will write off companies that make this move. Many stores already did this, which is a reason for the WizKids failure. How big a reason only Wizkids could tell you. Whether there is cause and effect for going exclusive, I think the idea of making the move to exclusivity is now fraught with more peril. I think that's as it should be.

On the other hand, you could argue that these exclusives are no threat to the game industry. Since Wizkids deal with Alliance, we've seen a lot of distributor growth in the industry, with ACD opening a new warehouse in Pennsylvania and another planned in The South, big expansion from GTS Distribution and various smaller distributors popping up all around the country. Game distribution seems fairly healthy, despite the developments of the last few years. In fact, there was so much talk about an impending distribution collapse in the industry after the WizKids move, I think there was a desire to see the growth of additional sales channels like we now have. 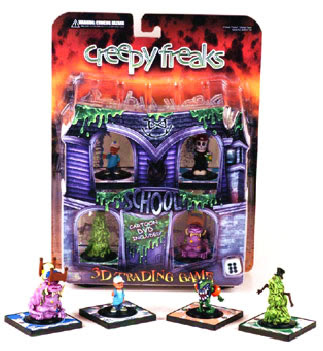 Creepy Freaks, by WizKids, is the iconic example of what can happen if you over-order product. Saying "creepy freaks" to a game retailer is code for over-ordered dead product. "Creepy freeks, ehh?" Nodding head knowingly.
Posted by Gary Ray at Sunday, November 16, 2008