Around this time each year, I look around the store and ponder big changes. What if I brought in a new line of miniatures? If I put in a mini coffee shop, what side of the store would it go on [the left]? What would evergreen hobby products look like? I like to think of this line of questioning as withdrawal symptoms. The holiday season is retail at full speed and hopefully, full efficiency. It lays bare all the possibilities of what your store could really do, if only enough people could be shoved inside over a finite period of time. It's addictive. The holiday season is an artificial situation, sure, but it happens and, you think, if you could just bring in the Next Big Thing, it could happen again tomorrow.

Feeding these dreams and delusions are the various trade shows that begin around this time of year. Toy Fair in New York is next week. I've been urged to go. The Gama Trade Show (GTS), the primary show for the game trade, is next month. I've been urged to go. The NRSHA hobby show is in May, and although I haven't been urged to go, I feel a sense of urgency nonetheless.  The largest congregation of women I've seen in one place since college, AKA the San Francisco International Gift Fair is next weekend. I'll probably go since it's free and I can commute. I don't expect anything ground breaking there. For me, it's simply not time yet for a paradigm shifting, re-creation of my store. But soon, I tell myself. Soon. Perhaps it's just the season talking. Some sort of Seasonal Affective Retail Disorder (SARD).

The truth is that we're in the traditional seasonal lull, a calm before the storm. It's not entirely calm, as we're seeing a lot of uncharacteristically strong sales this quarter, including our first ever profitable January. January is usually the afterbirth of a joyous Christmas season. What a pleasant surprise!  Sales are strong, but there's nothing really new. Nothing to scratch that SARD itch. The lack of the new is what can get me in trouble and can cause me to jump the gun, ordering junk rather than waiting for the new. However, there probably won't be much of a storm either.

We'll see new stuff soon enough. GTS usually results in new game announcements, although if I were to look back over the past few years, most were not noteworthy. The recession severely retards the process as well, with plenty of retreats and expansions. That's not all bad. Before The Great Recession, many a buffet was wasted on dismal products that astonished rooms full of game store owners with their crapitude. Lately, interesting announcements have been coming from Origins and Gencon, and more experienced store owners seem to graduate to these consumer based shows. I don't expect blockbusters, but I wouldn't mind something clever. For now, at least, it's about cleaning up after the party, restocking the store, and tweaking our policies and procedures so we're ready for the Next Big Thing. 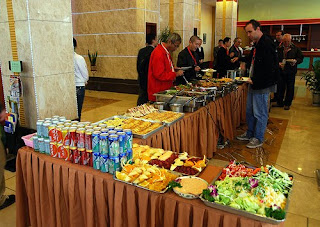