Not all game stores suck, but many do. Why? My theory is simple: Anyone smart enough to run and survive a small business, especially retail, is smart enough to know better. Those who stay in it after gaining this knowledge, usually have an unusual motivation that's not driven by economics, and therefore they appear irrational. Lets take a look at why running a game store is irrational.

There is clearly no gold at the end of the retail rainbow. It's a slog, a constant educational process with no predictability or continuity. It's just as much work and training as a professional career, but without the payoff or rewards from working up a ladder of proficiency. The chance of failure in year four is just as high in year ten. The skills are not transferable. Success is elusive. In fact, what keeps many in for so long is the slow progression that gives the illusion of success. A 10% increase in sales each year would be successful in most growing businesses, but in the average games store, that's only a few thousand dollars profit, chump change in exchange for your life.

That illusion of growth and success, chasing the rainbow, appears at first to be backed up by numbers. If you can only bring in more inventory, get a bigger store, hire better employees, you'll beat the monster. However, larger stores quickly learn that specialty retail doesn't scale well. A larger store means larger expenses, commensurately larger sales (if you survive), and much higher risk, but without the larger payoff. Tell a large store owner you've got a small store and they'll smile blissfully, their mind drifting back to better days and fewer cares. "You keep hold of what you got, kid!" Running additional stores is fraught with even more peril. But this doesn't answer the question.

Why do many game stores suck? It's because once the majority of "clever enough" store owners realize their predicament, yet remain in business, they lose the usual profit motive that drives business. This is true in all areas of the game trade, and much of perceived retailer incompetency is often a result of some other oddly motivated person up the chain. In business, you may not know someone, but you can at least trust them to be self-motivated enough to not screw you and act in their best interest. Not in the game trade for the most part. There are too many weekend warriors, lifestyle businessmen, who act against their own interests because their motivations are, well, perverted. Too many people with day jobs that quickly become their focus. The problem is that if they weren't in it as a lifestyle choice initially, they eventually find themselves with the lifestyle regardless.

When the profit motive is removed by default, game store owners find other motivations. Perhaps they want a quiet job with less stress because they have a WWGJ (Wife With a Good Job). Maybe they want a venue to play their games or paint their models. Maybe it's all about the ego and being head geek. They become industry leaders and moguls, often while their stores burn in the background. They lecture on financial responsibility while their bills go unpaid. They become mavens in segments of the game trade that interest them and ignore others, because if you aren't in it for the money, you damn well better be doing something you love. There's a lot not to love in the game trade. If you happen to play the games they don't love, there is no love for you. Why won't your store special order your game? Because the owner doesn't love you. What about the profit motive? If he was interested in profit, he would go back to his day job, or perhaps he's already back at his day job and the guy he hired makes minimum wage and has no power to help you.

Wow, what a downer, Gary. Didn't you argue elsewhere recently that game store owners can be trusted to follow their best interest? Yes, and this is only half the story. What about the good half? Having a good half is phenomenally good, considering all small businesses have about a 50% fail rate after four years. I would like to presume that half of all stores doing things right is pretty good and not all that uncommon for small business.

We know little about this good half. The old adage, "he who speaks does not know, and he who knows does not speak" seems to be apt. There are many successful stores out there with owners that quietly do their jobs. They don't participate in web forums, write blogs like this one, or pontificate at trade shows.

They don't just "do" their jobs, they tend to do them brilliantly. They're the ones doing the seemingly impossible, profitably running a store with much hard work and effort. Many have an angle, a related side business, a unique audience they cater to, a profitable online presence, or just decades of momentum and a giant customer base. Many take the kind of advice other stores give and turn it into an art form. Occasionally I'll be introduced to one of them, the inner circle of success that defies all the asshattery of the game trade. It's like the sky has opened up for me after taking advice for years from circus performers. Some just love the business side of the game trade; they have a high Int and a low Wis. I'm always trying to figure out how to be one of them. It's the elusive pot of gold at the end of my rainbow. 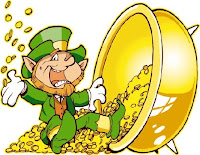