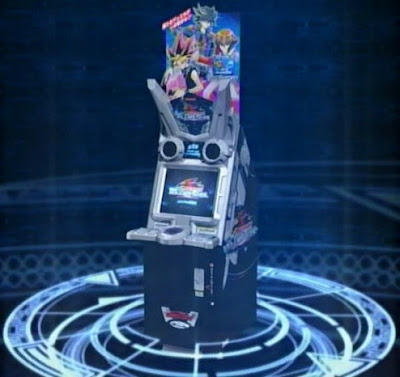 I ordered a pair of Yu Gi Oh Duel Terminals yesterday. This is a rather innovative product in the game industry. It's a video game that dispenses cards that can be played either in the tabletop game or on the system by scanning in the card. This was tried last year with console gaming unsuccessfully, suffering from piracy and other setbacks. The Duel Terminals allow players to play each other or simply get the hot card. It's big in Japan, has regular sets unique to the terminals coming out every few months, and the player base has clamored for them, making wild promises and predictions that has caused lots of investigation on my part. They may be right. Analyzing it from a business perspective, it seems like a worthwhile investment with acceptable risk.

So what about the character of the store? One of my business partners wondered what I would do if other game companies came out with electronic variants like this. I welcome it. If Wizards of the Coast wants to create some really cool electronic gaming table, I would consider it a worthwhile investment. We're a hobby game store, but it's inevitable that our hobby games have electronic components. How many people out there are gaming purists that never click on a computer, buy a PDF or play an electronic game? How many game masters use laptops to prepare or even have one at the table? Our biggest concern about RPGs is that the electronic variant is killing sales (D&D DDI). Wargames died when that model went electronic. Sticking your head in the sand and relying on the uninformed and technophobic is not a valid business model. I feel I'm doing that sometimes.

Also, here's a thought: These kinds of cross overs aren't cheap, which rewards those who are running their businesses successfully and leaves out lazy game store owners who only go after low hanging fruit. One of the problems in the game trade is the barrier to entry is so very low. It might sound elitist, but the more initial investment required to open a store, the more likely we'll have better stores with solid business models.

Still, we don't want to run an arcade. Nobody wants to hear beeps and annoying music while somebody else plays electronic games in what's supposed to be an analog refuge. This includes the customers but also the staff. As a game store owner, I recognize that I'm doing something I love in exchange for less compensation. Losing focus and character is something that happens gradually, so we're naturally suspicious about these things.

We struggled with where to place our Duel Terminals. They'll go in the front of the store next to the doors. It's an area known in retail as the Decompression Zone, invisible to customers who have just walked in the door, yet still visible to staff. It's dead space really, which is why, if you've ever noticed (you probably haven't), we place our Monopoly rack, toy wheelbarrows and other stuff that's unloved in that space. There should be enough room, but we'll have to make sure we avoid large crowds around them and that the sound is turned down. Their location was also chosen to avoid shoplifting (basic stealing of stuff) and pilferage (when stuff is pocketed in unwatched areas). In other words, our biggest concern is that these things don't become a nuisance.
Posted by Gary Ray at Friday, February 19, 2010