Once I found some time at the store today, I began raiding the singles. First I went with a bunch of recommended rares, Bloodghasts, a Vampire Nocturnus, Tendrils of Corruption and some cards to bring up to four some of the better cards I already acquired.  This would have cost me over $50 if I were a customer, so to make this project revenue neutral, I sold myself back all the green rares that I got in my two booster boxes. It just about covered the total, although I bought back a lot of junk rares that we normally wouldn't take. I threw in some card sleeves to keep my deck in shape.

The project is approaching $400. Just to dispel a myth, for $400, I could set myself up with all the painting and modeling supplies I need ($200) and buy a modest space marine army, maybe a 40K starter set and a battleforce box with a few more models to fill it out. Magic players shy away from miniature games because they perceive them to be expensive. It's not any more expensive than Magic, you just can't buy miniature games in $3.99 increments. 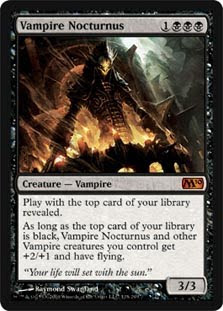 Once the regulars saw me rooting through the Magic boxes, they began giving me much needed advice. I was told the killer combo and the "must have" cards. Bloodchief/Sanguine as well as Vampire Nocturnus. Vampire Nocturnus is supposed to be the basis of a good vampire deck, but at $20 each, that's quite an investment. I've got two for now.

I'll get a better sense of deficiencies and balance once I've played some games. I also need to come up with a sideboard. Sideboards allow you to swap in up to fifteen cards between rounds. My understanding is that these are usually specialty cards to counter opponent decks that are potent against you. You might keep some good "anti-white" cards on the side. Thoughts on must have side deck cards?

Here's my deck today. I'm wondering if I have too many monsters.