My Gaming is the Prep

In the last couple years I've done a complete role-playing circuit, moving from D&D 3.5 to D&D 4th edition, and recently finding comfortable ground with Pathfinder, not entirely inaccurately described as D&D 3.75. In between, I tried Warhammer Fantasy Role-play third edition and messed around with Dragon Age. Right now I'm looking over the Dresden Files RPG, but really, I'm back home with my comfortable D&D, a game that fits like a worn pair of jeans.

I wish I could be one of those gamers that flits from system to system, using the entire realm of the gaming universe to satisfy their story needs, choosing the right tool for the job, but I'm not that guy. At the heart of my gaming needs, I just need a set of polyhedral dice and I'll make the story fit my system. D&D is my hammer and any story you can think of looks an awful lot like a nail to me.

I've described getting into Pathfinder as going down the rabbit hole. I played 4E long enough to know that making adventures and encounters for it was easy, especially with a DDI subscription. Doing the same with Pathfinder, like with 3.5, is incredibly time consuming, partly because of the structure of encounters, partly because there aren't any good electronic tools, but mostly because there's ten years of content to draw upon. It's an embarrassment of riches.

I was a little panicky at first, with so many resources. I recalled all the prep hours of the past and as I began working on my campaign, the hours started flying by, hours that I used to spend with my family. Then I remembered it was about the story. Focus on the story and the resources will show themselves. For me, most of gaming is this kind of prep work (and anxiety), along with setting up blogs, forums and Facebook pages to encourage player collaboration.

For role-playing, I enjoy the world building and adventure writing. For miniature gaming it's modeling and painting. My brief foray back into Magic only interested me when I was doing research and deck building. That's probably why I'm not much of a board gamer and find computer games to be an absolute and utter waste of my time. Where is the creativity? Where is the art project?  Where is the many hours of prep time for a few hours of game time? The prep isn't a bug, it's a feature. This is just my personality, and as a White Dwarf article recently pointed out, people are in the hobby for a variety of reasons, and playing the game is just one of them. The same reason why people play board games and video games, their limited time required for preparation, is what drives me away from them. 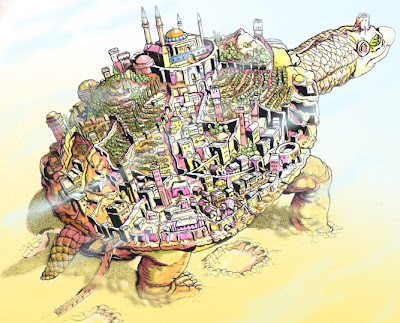 The Mogra, original artwork commissioned for my AD&D Planescape campaign.
A pre-cursor to my ten year urban 3.x campaign.
Posted by Gary Ray at Tuesday, April 06, 2010