I once again have to give credit to Paizo for taking an old, tired, and quite frankly, worthless RPG concept and updating it to modern role-playing sensibilities. Dungeon Denizens Revisited is like those old Dragon magazine articles about monster ecology. In the old articles, an author would ramble on for half a dozen pages attempting to graft modern biology onto a monster, as if the number of the monster's stomachs would somehow enhance game play or provide insight. I often read these articles as a kid, usually fan submissions, as a test of fortitude, to claim I actually had read the magazine from cover to cover. Paizo thankfully updates this model, as they've done with other Pathfinder books, with play relevance as the central design goal.

In Dungeon Denizens Revisited, Paizo takes the most absurd monsters from the Dungeons & Dragons milieu and does a few interesting, and most importantly, useful things. The overview tells you where you'll find them, providing some examples for game masters fishing for new encounters. The ecology is light on biology and instead focuses on how these creatures came about. Dungeon Denizens is full of the bizarre, so there's a lot of potential adventure hooks in finding mad wizards or crazy cults that created these babies. We get ten monsters in the book: bulette, cloaker, gelatinous cube, mimic, otyugh, owlbear, purple worm, roper, rust monster and shambling mound, all creatures you've probably used at least once before. You've got the most bizzare monsters, yet familiar to the D&D audience, re-envisioned for usefulness without breaking their historic roles.

The habitat and society section allows you to take that initial "where are they found" section and expand it. Yes, otyughs live in sewers and swamps, but what would an otyugh society look like?  Campaign Role directly addresses what you've learned previously and provides ideas on campaign integration, including some really scary concepts of what would happen if these insane monster got organized. The Treasure section does this same integration based on what we know about their habits and ecology.

Variants provide a number of solid variations on the monster theme. After all, if you're going to have an entire adventure or campaign based on one type of monster, you're going to want to mix it up or create a boss monster. The original monster stats are also included, which you may find redundant or convenient. I'll go with convenient.

Finally, the monster in Golarian section discusses how the monster functions in the Pathfinder world, or if you don't care about that world (like me), a bunch of good examples of how you can use them in your world. As these monsters tend to be one-off, freaks of nature, it's pretty easy to give them a prominent side roll without upsetting the balance, as you might have with giants or dragons. There's something going on right beneath the surface, sometimes literally.

Every step of the way the authors (there's a differenct one for each monster) keep the question in mind: "How will the game master use this?" It's easy for such a fanciful book to become irrelevant (old D&D) or mired in crunch (new D&D), but Paizo knows its audience and has to actually work for a living. Their fans are the most discerning in the D&D community and without D&D logos plastered over the cover, it doesn't get the benefit of doubt. The 64 page book is in color with evocative artwork on every two page layout. I started reading it last Saturday when I had some free time, and by the end of the day I had an innovative otyugh side adventure spawned from the adventure seeds that littered that chapter.

Lets face it, D&D 3 is no spring chicken. It's creaky and old and quite tired after ten years. Pathfinder not only updates the rules for third edition, it has updated the approach to the game. It strives to be useful, relevant and entertaining. Sometimes it fails, but Paizo usually pulls it off, thanks to a stable of some excellent, creative writers. My impression is Pathfinder players are more experienced. They're willing to forgive the ocassional gaffe in exchange for creativity. I'm continually surprised and delighted by what I'm discovering, and that makes being a DM, with those hours of prep time, so much more rewarding. Dungeons Denizens Revisited is $19.99 and we have it in the store. Now if I could only re-order enough copies after I pimp the Pathfinder books I like. 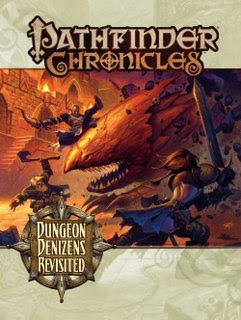