I've always wanted to be behind the scenes, rather than out in front of my business, but that's just not how it works, at least not if you want to be successful. There's a certain level of small business self-promotion that's required, and I have to admit it often makes me uncomfortable. Nevertheless, I must own this circus that I'm running and that includes standing in front of the big tent and inviting people to behold the wonders within. Step right up!

So here's a brief background, suitable for my future website upgrade: 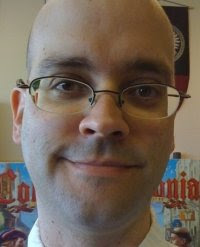 Gary Ray is owner of Black Diamond Games in Concord, California, the premiere game store in Contra Costa County celebrating its seventh year. He has an undergrad degree from San Diego State University in Asian Studies and a MA with honors from Graduate Theological Union in Berkeley. Studying classical Tibetan and writing his honors thesis, Tendai Influences on Dōgen's Concepts of Enlightenment, qualified Gary to bus tables in a sushi restaurant. Luckily he had other interests.

Gary was interested in computers, especially connecting American Buddhists electronically in the pre-web era. He was co-founder of Tiger Team Buddhist Online Service and editor of CyberSangha magazine. This eventually resulted in meaningful IT employment around the time of the dot-com boom. He became very good at spending other peoples money, mastering terms like "burn rate" and observing esoteric business practices, like selling products at a loss in hopes of making it up in volume. Anyone who could combine a noun and a verb into a company name was a genius during these times. These practices are not generally recommended when spending your own money.

While working in IT, Gary enjoyed running elaborate Dungeons & Dragons games, usually requiring obscure gaming supplies that Bay Area game stores neither stocked nor could successfully special order due to their general lack of competence. This got him thinking, and combined with a general hatred of the IT field, one which most of his IT peers shared, he took up a vow of poverty in hopes of running a better game store. Astonishingly, it worked.

Since starting the store, Gary has dabbled in Euro board games, enjoys playing Warhammer 40K (Imperial Guard Tallarns FTW), and of course, engages in his true gaming love, Dungeons & Dragons -- currently Pathfinder. He played Magic: The Gathering, back in the day and has dabbled in other RPGs, but it's that love of D&D and those esoteric accessories that excite him.

Gary is also married with a six your old son named Rocco who's obsessed with Hot Wheels and time travel.  When not working, painting miniatures, planning a D&D game, or writing in the third person, his priority is family time.
Posted by Gary Ray at Tuesday, May 04, 2010