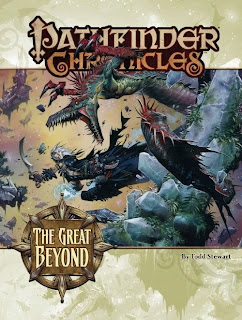 I've been reading one Pathfinder Chronicles book a week for the past month. This week I'm reading The Great Beyond, the planar book for the setting. It finally occurred to me why I like Pathfinder products so much.The model is a kinder, gentler version of "embrace and extend" from the software world. The products are intellectually compatible with what has come before. In other words, if there was subjective gravity on the Astral Plane in 3E, there is in Pathfinder (which means it probably matched 2E). In the case of this planar book, it has hints of flavor and mechanics going all the way back to Gygax and The Great Wheel, yet there's a feeling it could easily fit into AD&D 2nd Edition Planescape. Their approach embraces the past, while adding rarely seen depth. It avoids bizarre convoluted structures and name changes.

Where they depart from canon and extend beyond is with their sophisticated explanations and tone. For example, I just finished reading Book of the Damned, Vol 1, an in depth look at Hell. It was chilling. In past editions of the game, there was a mechanistic view of the planes. Everyone had an alignment. When they died, they went to the plane that best suited them, a kind of personal heaven. Book of the Damned basically says you go to Hell because you've been deceived. They hate you. They tricked you. You will suffer for your hubris. Yes, you belong there, but it's no heaven. You will be tortured and abused for eternity. Was is worth it? Paizo isn't pulling any punches. The mechanics remain the same, but the reasoning has matured. There is a more serious tone to much of their accessories that takes the premise that this stuff is for adults. Stuff characters do matters. It's material that TSR/Wizards of the Coast would be afraid to publish. It's right up there with the excellent, mature writing I've seen from White Wolf.

The Great Beyond continues with this extension of sophistication. There's an attempt to explain how reality works, not just describe it. For example, the entire transmigration of souls is discussed, from beginning to end. If this was ever done before in D&D, I haven't seen it. There's the origin on the positive energy plane, the souls journey to the prime material through star portals, the migration upon death and the various ways in which the soul can be captured or snagged, such as by hags in the shadow plane. There is no greater injustice in the mutiverse than an undeserving soul being ripped from its owners body and abused for eternity.

Other planets and solar systems have a place in the planes, which is unusual to see. And of course, there are many shades of gray. The traditional D&D planar tradition is that everything has a place and in extreme measure. The Great Beyond goes over the various factions within a plane and why they act the way they do (or hints at least). They don't act good or evil because they're on the plane of good or evil. They have their reasons including quite a few grudges that go back to the beginning of time.

So I'm becoming a fan boy it seems. If D&D is your game, I think it's fair to say that if you've wanted some sophistication, you usually had to look elsewhere. Perhaps third party publishers or perhaps another game system (such as the previously mentioned White Wolf). Paizo is not Wizards of the Coast, aka Hasbro, currently trading on the New York Stock Exchange for $39.53. They can take chances and be edgy without worrying about corporate or angry moms or quarterly profits. I haven't seen really good "official" D&D writing since second edition. Sure, the rules were good, but where was the writing?  I guess you forget what you've been missing until you're re-introduced to it.
Posted by Gary Ray at Sunday, May 23, 2010