As the economy improves, we've begun expanding back into more mainstream areas of the game world, such as children's games, classic games and puzzles. The general public, unlike hobbyists, cut way back on their game purchases when the economy was in trouble. Our sales of chess sets, jigsaw puzzles, and toys plummeted in 2009, while our overall sales were up about 12%.

I'm no economist, but I think we're generally out of the woods, with demand for mainstream games picking up, albeit with a more cautious consumer. There is a smaller market for luxury items, but a larger market for safer. mainstream items. Still, there's a price point for everyone and we made it a point to round out our classic games with some high quality, albeit expensive, domino and cribbage sets. Likewise, we're betting that parents will have a renewed interest in fun, educational games for their kids. It's an area that we've struggled with for years, mostly because we haven't had the clientele and the game trade is poor at kids games, but we're committed to expanding in this area.

Last week we added the full line of premium domino and cribbage sets from the Alex Cramer Company.  This family owned business in Southern California has been making beautiful, hand made sets for decades. We've been asked for premium sets for years, but never had a source until I stumbled upon them at another game store. 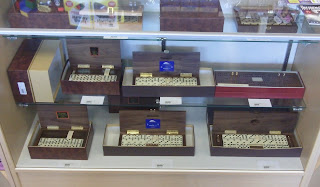 Our Ravensburger puzzles have been selling well, along with Educa, but we wanted a broader selection. Pomegranate is a paper company in Petaluma that makes 1,000 piece jigsaw puzzles by popular artists like Edward Gorey and Escher. We've been slowly growing our puzzle crowd over the last couple of years, and I think they'll like these. 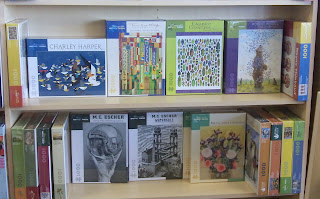 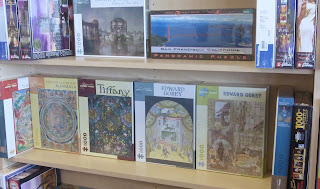 The game trade does a horrible job with kids games. It's mostly a niche filled by toy companies who sell direct. We recently opened a Habba account to get at their excellent games, and we're planning to expand other lines. Yesterday we brought in a Gamewright rack with a bunch of additional card games. These are popular, inexpensive. mainstream card games that many of our parents like.

Finally, we've paid attention to our customers requesting dice games. We've brought in a variety of dice games and have stocked our dice cups deeper. Not shown here are other classic games, including additional checkers and chess sets, bridge cards and bridge score pads. We also found a source for Pressman games, and brought in the first half of our Pressman order, including Tri-Ominoes, Rummikub, Mastermind, branded games like Jeopardy and Wheel of Fortune and their line of domino sets. Hey, grandma gets to play games too. 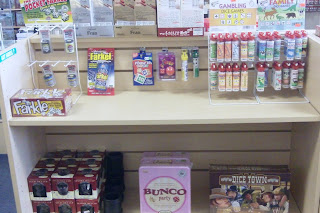 So what about the hobbyist? We're in this wonderful position of having enough inventory to satisfy most needs, and solid inventory systems in place to cycle out older inventory so we always bring in the new releases. Our strong 40K sales have strained the budget of late, but overall sales are strong enough to compensate. Besides 40K, we've been able to expand in other areas too, such as Malifaux, Pathfinder and a broader selection of card sleeves. Also, most game sales are fairly flat, except board games and CCGs. Whenever you're cursing CCG players (we all do at times), I'll just point out that CCG sales have kept the store in the black over the last year.

Inventory is a zero sum game. Something had to go for all this new stuff to arrive. Toys have fueled a lot of this transition, as we move far, far away from our initial diversification attempts. I've even accepted that a lot of good selling toys just don't meet our objectives, so they must go too. A lot of miniature games have hit the discount bin as well, such as all but our core Lord of the Rings sets, initially ramped up for the War of the Rings release, Firestorm Armada, Infinity and most of our "indie" miniature section. The indie minis were a good idea in the old economy, but failed miserably in the penny pinching new economy. Collectible miniatures are officially dead as well, with the last Star Wars minis release behind us (SW is on clearance at 40% off) and all the D&D minis moving to semi-collectible. Our minis rack is slated for removal soon.
Posted by Gary Ray at Thursday, May 06, 2010