Black Diamond Games has signed up with Foursquare. Foursquare is a geo-location social networking service. Using a smart phone (or perhaps your iPad), you check into various locations, which usually links back to your Facebook or Twitter account. These types of services attempt to connect you with your friends in the real world. There are other benefits too, as businesses can use your location to provide you benefits, targeted at you when you check in. 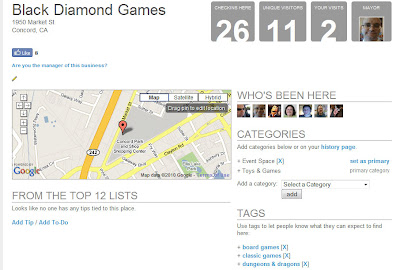 For example, last night we were out at Jack London Square in Oakland, having dinner at one of our favorite restaurants, Home of Chicken and Waffles. I checked in with Fousquare and was immediately told there was an offer nearby. Ben and Jerry's was having a three scoops for three dollars special. All I had to do was check in after I walked over. So guess where the family went after dinner? Granted, the Ben and Jerry's screwed up and they weren't offering the special until June 1st, creating ill will on my part, resulting in my blogging about it to over a hundred people, but done right, it's a pretty powerful marketing tool and a clever way to score some free or cheap stuff. However, like anything in marketing, you have to deliver on your offer. I'm pending business owner approval at Foursquare for the store, but once that's completed, I'll have specials available to those who check in often.

Foursquare strikes a balance between customer friendly and business friendly. You can provide tips about a business, become "mayor" if you've been there more than anyone else, and generally make yourself useful.  Businesses likewise can add information, provide incentives, and manage their relationship, as opposed to handing the relationship keys to the customers, who may or may not understand your business. This is in sharp contrast to the snarky, adversarial relationship one sees with Yelp. Yelp, you are wretched.

There are some fun elements to Foursquare, in contrast to your usual check-in system. You receive points for various activities and there are badges to collect. These incentives are a fun way to track your active lifestyle and compete with you friends. With my older peer group and with only about a million people signed up with Foursquare so far, for me it's mostly a game of solitaire. Like any social networking site (or any network), value increases when more people are added. It also adds to the ever faster flowing stream of information on Twitter and Facebook. However, if you're the silent type who never posts, and your friends are wondering if you fell of the planet, this might be a good thing for you.

Foursquare is the leader in this tiny market segment, so I can't guarantee they'll be around tomorrow, won't get gobbled up by Google, Yahoo or Facebook or that the whole concept won't falls on its face next Tuesday. However, if you're a cutting edge, forward looking, social networking, smart phone using type of person, you might want to give it a try, even if it's just for the occasional Black Diamond Games coupon.