We sell role-playing games into six figures each year, and although they're on the down cycle, I always wondered exactly what was selling. I know turn rates for individual games. I know what's doing very well right now (Pathfinder), our most under-performing game (Traveller) and the game that has me confounded with its wonky sales patterns (D&D 4). What I didn't know, is exactly what people were buying.

Core rulebooks always got me excited. There's nothing more promising than a core rulebook. It's the most bang for your buck, the evergreen of its line, the last thing to drop and the games linchpin. Games with core rulebooks out of print might as well be on vacation. Nobody will buy that game. It has the stink of death about it (take note Paizo). Publishers usually see it this way too, and I'm pretty sure the only sure thing in RPGs is you'll sell a lot of your core rulebook.

Accessories and adventures are nice, but not necessary. Most players will at least buy a core rulebook, while the common wisdom is that the game master will likely pick up the accessories and possibly the adventures. But is that true? What are the ratios? It's an idiosyncratic question from a point-of-sale perspective, since we generally don't care whether a game book is core, accessory or adventure. We track by game system and that's considered fairly sophisticated. Half the game stores out there use a cash register. So lacking any stunning insights on the game trade, and with the family sleeping, I began the meditative task of crunching some numbers (when I should have been meditating). 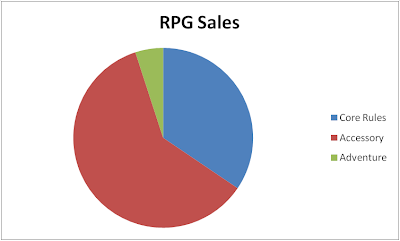 Accessories are 60% of our sales, core rulebooks 35% and adventures 5%. Adventures are the red headed step child of the RPG world. Nobody really wants to bring them out, yet they're part of the family and fans demand them. This is especially true in "crunch heavy" games like D&D and their variants, where walking across the floor can have a paragraph of rules. When a publisher puts out an adventure as a PDF, I actually breathe a sigh of relief. These numbers didn't make much sense to me. Where were the overwhelming sales of core rulebooks? So I dug a little deeper.


When I look at profit per item, core rulebooks outsell accessories two to one, and accessories outsell adventures two to one. Adventures are the retail equivalent of community service, a convenience for our customers. They're the board game equivalent of Candyland, sitting quietly on the shelf, a re-assuring sign that we carry the full spectrum. So you can see why I get excited about a core rulebook and sigh in resignation at a new adventure. Many publishers don't even print them anymore. In their defense, I will admit they tend to skew slightly lower in price than the other products.

The overall sales chart represents the raw stuff on the shelves. There are vastly more accessories than core books, overall. Often the core rulebooks were sold years before, and the accessories are keeping the game alive.  It's the per profit sale per category that seems to tell the narrative I was looking for, and it's a familiar one.

Envision these numbers for a D&D group using the profit numbers. We've got four players total. Each player and the DM buy a core rulebook (4). An accessory comes out, perhaps a book on rogues. It's fairly useful for the entire group, but do all five people buy it? Heck no. The DM picks one up, because he's really into the game, and perhaps one player, the guy playing the rogue (2). Then the adventure arrives, the Quest for Dwindling Profits, the much promised adventure about gnomes and their complex loan system based on borrowing against the value of powerful magic items. The DM probably picks it up (1ish), but he might not. It's based in a coastal town and he's running a desert campaign. Or perhaps he hates gnomes. Or he's been traumatized by other financially oriented adventures. Perhaps he scoffs at pre-published adventures and gets his creative fix by writing his own. In any case, slightly less than one per group is the likely sales outcome for adventures.

Let me know what you think, especially the relationship between gross sales and profit per item. I think there's still something I'm missing. Could we say that every group buys twice as many accessories as core books? That would mean our group of four would buy eight accessory books for their game.
Posted by Gary Ray at Sunday, May 16, 2010