I'm always looking for tools to help me understand my business better. The one I recently came upon was comparing expenses as a percentage of sales on a year to year basis. I'm no expert on this stuff, just an enthusiastic dabbler, but this seems like solid gold. I like this because it skips over what should be and goes right into what is. Industry folks will throw out numbers, such as rent being a certain percentage of sales, but that's highly variable. Every store is different and once you're on the ground making money, there's not much you can do about it.

Using this year to year comparison assumes your business is relatively on track. You already spend a lot of time beating expenses into submission, comparison shopping regularly and finding new ways to cut costs. That's great, but this report shows the fruits of your labor. The goal then is to see what expenses have gone up this year from last year that may be out of proportion. This tool helped confirm what I already felt in my gut. Once you have the numbers you can then try to put a lid on expenses. You can still beat them into submission, but now you know your problem areas. You now have goals instead of vague notions of cost cutting. That combined with rising profits is how you make money.

To get these numbers, get a Profit & Loss statement from Quickbooks from each period and dump it into Excel. You can easily create a column for percentage of sales for each expense and then a column comparing them. Finally, this assumes you've got good data. I mostly do. At the very least, I'm consistent. 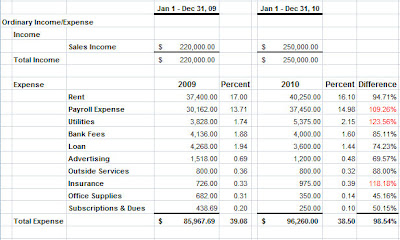 The percentages are my percentages more or less, but I've jiggered the numbers to avoid revealing too much information. You'll notice a few things. First, expenses that have stayed relatively the same recede into the background. As a percentage of income, they become less onerous. Was 17% too much to pay for rent? Well, now I pay 16%, even though the actual cost of rent rose 7.6% (a point of concern in itself). My outside services fee remained identical, but as a percentage of income it dropped 12% year to year when balanced against my income. We still want to beat down these expenses, but our income is out pacing them.
Where you learn things is where expenses went up. For example, my utilities went up 23% (proportionally). This is because I just got off a PG&E balanced payment plan in which their screwed up system left me owing thousands of dollars from three years of their bogus accounting. That's reflected in that number. Insurance went up a hefty amount; something I kind of new, but now have confirmed. I'm told this is an industry trend but that mine will go down once a claim rolls off next year. Finally, I saw a 9% increase in payroll, reflected by our additional staffing. If I hadn't planned this (I did), this would set off alarm bells. I've known we were understaffed and this is the year we could finally afford to staff better. It's our biggest area of store improvement.

This might seem like the kind of work you do when you're having problems, but it's in a growing business where expenses can get out of control. Our sales are up about 12% this year, but it seems like we're holding on to the tail of a charging rhinoceros. This is a dangerous time because you can justify a lot of expenses when you're raking in cash, but then end up with nothing, or worse. As you can see in the example, my total expenses year to year is only half a percent lower. There are extenuating circumstances, but there are always extenuating circumstances.
Finally, one thing I didn't include here is cost of goods sold, which is the biggest expense and easiest way to save money. If my COGS was 57% and my expenses 38%, my profit is 5%. Working with distributors to knock a point or two, or even three off this number is an enormous savings. It's like free utilities. But that's another article.
Posted by Gary Ray at Sunday, September 12, 2010