I did a guest post for Louis Porter Jr's excellent blog "In the Mind of a Mad Man!" I began drilling down into how little time I had to research product. It got me thinking about how much time I spend on the business and what I actually do. My physical time at the store is fairly limited, mostly because I've learned to delegate and work from home whenever possible. I spend about 38 hours a week at the store on average, an insanely low number for a business owner. It's about 1,000 hours a year less than my first year in business, when I worked seven days a week and took two days off total for the year. However, doing the math and counting up the other tasks I perform at home shows that this is only a bit more than half the hours I spend on the business. My count is roughly 60 hours a week, meaning there's probably 3 hours a day outside of work where I'm doing my thing.

Here's how it breaks down: 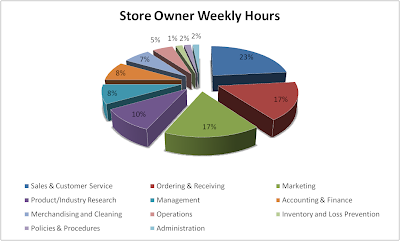 This is not to say that everyone has this time allocation. In fact, I can guarantee they don't. The best part of being a business owner is controlling a lot of your activity. For example, many store owners refuse to hire employees, so management is not even a category for them. Also, traditionally I would spend about 1-2 hours a week on marketing, but with social networking it's about 12 hours each week (and probably another 7 in goof off mode on Facebook). The size of my store is also a big determiner in what I do, so ten hours a week purchasing and receiving might seem excessive to one store owner, while a very large store owner might have a dedicated person for this. Also, I could have easily decided to have two stores, in which case my time break down would be much different, with most of my day spent managing people and processes. I could delegate stuff I really don't want to do. In fact, I delegate much of my management tasks. I hate management and I have a manager who knows what I want. However, I would never delegate bookkeeping (some people do).

There are a lot of tasks that get done monthly, quarterly or annually that are lumped into these categories. That's what makes this job interesting; there is a certain amount of repetition, but there's also a lot of creativity and one off tasks to perform. At any time an idea might hit you and you're off onto your next project. Later this week I'll be building a new server, a project that half evolved and half thrust itself upon me when the old server stopped working. With good planning, you can avoid surprises. For example, this server will be built at my leisure because we have a backup solution, while its predecessor was repaired in desperation, late at night. A lot of tasks are damage control, like dealing with banks, landlords, and insane utility companies that seem to think their ineptitude should be paid for by you.

You don't see any "play games" in this list. I don't consider playing games part of my job, although I play in my off hours. Those who think I have a wonderful job because I play games all day and get games at cost are unclear on the concept. I have less time to play games with my schedule and my income reduction in store ownership isn't made up by having cheap games. In fact, I end up buying more games than ever before and have less time to play them. Sound familiar?

I think playing games and trying new things is absolutely fundamentally integral to what I do, and I feel guilty if I go a while without that interaction, but there are plenty of good store owners who haven't played a game in years. That would kill store ownership for me, but they don't see it that way. The board gamers think I should play more board games (they're right). The 40K players think I should play more 40K (they're right) and the RPG crowd thinks I should branch out into other systems (they're also right). However, there's a fine line between playing games for sales purposes and enjoying them as a leisure activity. When games become work, I get very grumpy. Losing that spark of passion for games is a big fear. However, I can say with certainty that working at a game store does nothing to lessen my passion for them.
Posted by Gary Ray at Tuesday, September 14, 2010