I've been running a Pathfinder Council of Thieves campaign since April, but lately I've been excited about playing in a game. My Pathfinder player experience has been limited to Free RPG Day, when I played a half-orc cavalier from the Advanced Player's Guide beta. I'll continue to DM, but playing is just what I need about now. Some will point out that I've been playing for nearly ten years, but I do think there's a big difference in play in Pathfinder compared to 3.x.

I'm kind of traditional with my DMing. I'm not a big fan of electronic tools. Everyone in our group has an iPhone and/or an iPad and most keep their characters on it. Some use it for dice rolling. I don't object, but I'm a fan of rolling the bones and looking things up in books. It's a conceit that probably comes from having the home field advantage. I've got Dwarven Forge, a ton of books and a lifetime of miniatures spread across my house. I'm the king of my analog castle. We communicate and keep track of the campaign using a private Facebook group and initially I used a blog for campaign updates, but I'm still kind of a gamer Luddite.

As a player, I've been observing what tools other people use to run their games. Most are not terribly polished, but I can see the value in more collaborative models, such as Obsidian Portal and the cool things you can do with Google Sites. Clunky sites are alright if the players will use them. I had a big "ah-ha" moment when I found myself eagerly adding new content to the site of the campaign I'll be playing in. I've also become a big fan of PFR, a Pathfinder SRD tool by Ufisk that works on the iPhone and other "i" devices. It's especially useful if you've got a small child on your lap and you want to zone out without being anti-social. The program is polished enough so it's faster than book searches. Not bad for $5. D&D 4 spoiled me when it comes to looking up content. Pathfinder needs to be faster and hopefully this will speed it up.

As for character management, I'm using Hero Lab by Lone Wolf. It contains Pathfinder core rules as well as many updates. It's easily as useful as a DDI subscription for players. The Serpent's Skull Player's Guide was added over the weekend, making character creation that much easier for me.  It was a no brainer to choose a variant class, variant racial abilities, and traits and feats from across the Pathfinder line, along with a ridiculous amount of equipment. I ended up with a Halfling Lion Shaman (druid) with a ton of tweaking. In typical 3.5/Pathfinder fashion, I spent many hours getting it perfect, but it feels unique.

When it comes to technology, I'm all for anything that improves the game, makes preparation faster, characters easier to generate, and that improves communication. I don't want a replacement for the game, so dice rollers and networked devices to handle combat make me shudder. 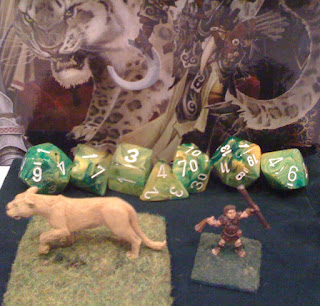 Recycling: From years of playing, we've got my friend Chris' halfling mini, Dave's lion (re-based over the weekend for 2x2 action) and new Chessex dice. One of my rituals is new dice for each campaign character.﻿  I considered finding/building a halfling mounted model, but figured there's enough room on the 2x2 base to just place the little guy there. 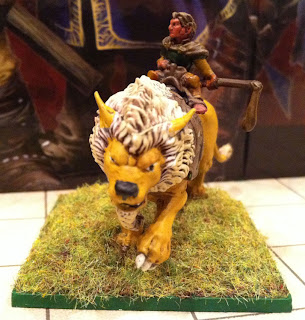