We tried an experiment recently where we made this offer: Trade in the D&D core book that you don't want and get half off the book you do want. In other words, if you're belly aching about 4th Edition, feel stuck with abandoned 3.5, or feel betrayed by Pathfinder, stop complaining and come get the book you want. We'll help you into your next game system.

The thinking was that we would break even on the deal. The goal was to re-align RPG customers towards playing again, giving them a shot at a new game. What happened was a bit surprising. First, it re-affirmed that we do, as advertised, buy used role-playing games. We took in some huge collections in addition to our trade in offer. One angel customer knew his collection was worth a mint, but wanted it in good hands, so he gave it to us for a song.

Second, and this was surprising, almost ever customer who took advantage of the trade in bought the Pathfinder core rulebook as a replacement. It brought in enough 3.5 and 4th Edition D&D used books that we're scrambling to get rid of them. Nobody traded in a Pathfinder core rulebook. Nobody picked up a D&D 3.5 Player's Handbook.

We're now so overstocked on 3.5 that we've stopped paying a premium for them. In fact, we're having a buy one, get one free sale this week to try to cut down on the overstock. 4E books (as you can see below) surprisingly had the same problem and are being bundled in core rulebook sets of three and sold for $35.  We probably lost money on the straight trade of 4E, but the goal of transitioning players, and the unintended result of obtaining some amazing collections, made up for it. 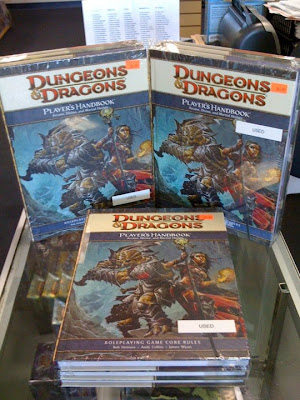 To give you a demand example: We can still sell a 3.5 PHB for full cover price (but have trouble with supplements), stock the new 4E PHB at two deep, and stock the Pathfinder core rulebook at five deep. As for the demand for 3.5, customers still want books, but they expect them to be cheap.  Over the last year, I've noticed the prices of these books has dumped hard online and local used book stores are dropping them fast.

The easy fan analysis is that 4E is the suck and Pathfinder is full of win. It's more complicated than that. What we're seeing are a few things. First, a huge number of past and current D&D geeks bought the 4E core rulebooks just to buy it and look it over. My guess is half the local sales of the initial gift set went through Amazon at close to cost and that getting another book for a sweetheart deal drove them to pick up a Pathfinder book, just to see what all the fuss was about. Second, the secondary group of 3.5 players are coming off the sidelines. They're choosing something familiar. After all, if they were resistant to change at first, which system offers something safe and familiar?  Finally, the suck and win argument has some validity as disgruntled 4E players are hoping to stay in gaming by finding some hope in Pathfinder.

From a store perspective, I have to wonder if Pathfinder has staying power. This goes back to the question of whether an adventure writing company can support a role-playing line. Although I think a key selling point of Pathfinder is the excellent adventures, they're not what drives the line for us, partially because of their subscription model that bypasses us (why a lot of retailers think I'm nuts for even giving them the time of day). However, what I see now and expect to see in the future are rules supplement driving sales (5% of the product line driving 64% of the sales). Below is our break down of sales that shows rules are the ticket. The Advanced Player's Guide shot Pathfinder up to our number one game and I expect upcoming supplements to do the same. 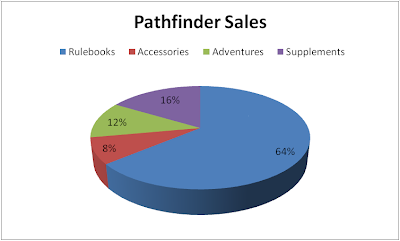