Pathfinder is now our best selling role-playing game. If you don't know about it, it's a spin off from Dungeons & Dragons 3.5 using the OGL license. Many call it Dungeons & Dragons 3.75.  It's characterized by the same level of complexity as 3.5, but with a lot of rules tweaked and updated. It's improved. It's still slower than 4th Edition, but it has that dense, flavorful feel of 3.5. What it means to most people is a familiar game system with some excellent new ideas. GMing a Pathfinder game is nearly identical to a 3.5 game, with most of the burden on the players with their new character abilities.

Where Pathfinder truly excels, I think, is in the writing, especially the adventure paths. The ideas are fresh, experimental, and mostly work. The source books are uncensored, and paragons of role-playing writing. If you haven't delved beyond Dungeons & Dragons before, prepare to be blown away. I think it's like White Wolf meets Dungeons & Dragons.

Navigating Pathfinder can be daunting. We carry every in-print product from Paizo, including GameMastery accessories. I'm not even sure how many that is. They are not as cleanly organized as Dungeons & Dragons, and don't carry consistent "trade dress," so it's not surprising that customers get that blank look on their faces when they try to figure out what to buy. I'm going to try to break that down.

Getting started requires the Core Rulebook for everyone, which is a combined Player's Handbook and Dungeon Master's Guide. GM's will want the Bestiary and probably the very good screen, and perhaps the GameMastery Guide, which provides great advice and some useful resources. The new Advanced Player's Guide is now a must have for players, but still optional, along with the Armory. That's all. There are several race books, but those are optional and more GM focused. There are no class books or other splat books, although rules, mostly traits and feats, are scattered throughout the Pathfinder collection. Some find this maddening. I use Hero Lab, a third party product, to consolidate all this stuff for character management.

If you run your own adventures, you're done, but if you want to delve into the world of Golarion, the Pathfinder setting, you're just getting started. See the chart (I love charts): 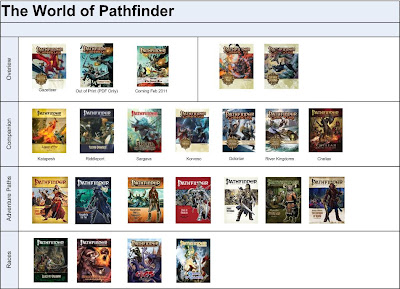 The best way to get started is to jump in with the first book of an adventure path. This is the bottom up approach. Adventure paths are complete campaigns from 1st-15th level (or so) spanning six books. They also include free PDF player guides (sometimes in print) and a map pack towards the end of the run. This is all you'll need to play. Want an open-ended sandbox style adventure with the PCs creating their own kingdom, try Kingmaker. Want a gritty urban adventure, try Council of Thieves. There are now seven adventure paths and a bunch of modules, if you're not ready to commit. You can also use these for 3.5 D&D, assuming they're one level higher in power level.

But what if you want more? Paizo puts out a bewildering assortment of extra books in a few different categories. The Companion books are regional sourcebooks often keyed to the adventure paths. If you want more background, there are books on the planes, religion and races. Beyond that, there are some very clever, but not necessary books on re-imagining classic D&D concepts, like magic items, vampires, dragons, you name it.

Tieing everything together, at the top of the chain would be the Campaign Setting books. The main campaign setting book is out of print right now, but a new one, The Inner Sea, is due in February. Until then, I can highly recommend the Gazetteer. If you're not happy with the bottom up approach of branching out from the adenture paths, the Gazetteer will help you work your way down. It includes a map, descriptions of the regions and races, a setting timeline and an overview of religion. If you find everything mentioned in the Gazetteer on the included map, you'll be Golarian fluent in no time.

What you won't find in Pathfinder are endless splat books and rules updates. This is learning from experience. DMs want to tell stories, not fight against the book of the month power curve. If you're about stories and great writing, the Paizo approach is fantastic. If you're a power gamer, you will be constantly Jonesing for new candy.
Posted by Gary Ray at Saturday, September 25, 2010