I've been with the Amazon associate program since the beginning, although I haven't sold anything in years. Like everyone else in the program, I got the email stating the program was terminated for those in California, due to the new law that requires Amazon to collect sales tax if they have a presence in the state. I am that presence, so I must go. Amazon blames the governor directly for this, not the legislators or the broke counties and cities that desperately need revenue, and of course they don't blame their tax evading customers:


Unfortunately, Governor Brown has signed into law the bill that we emailed you about earlier today. As a result of this, contracts with all California residents participating in the Amazon Associates Program are terminated effective today, June 29, 2011. Those California residents will no longer receive advertising fees for sales referred to Amazon.com, Endless.com, MYHABIT.COM or SmallParts.com. Please be assured that all qualifying advertising fees earned before today will be processed and paid in full in accordance with the regular payment schedule.

As you may know, if you buy something taxable, you must always pay sales tax. If it's in a store, it's done whether you like it or not at the register. If it's done online by a California retailer, it's likewise done automatically as you check out. But what about when the tax is not collected, like from an out of state business? You're still liable for the sales tax and are legally required to report it on your taxes. Almost nobody does this.

You could argue that there should be a federal law that taxes online sales to fix this. You could argue, quite unpopularity, we should have a new state division of the franchise tax board to track down this money. You could also argue quite successfully that states are on weak constitutional grounds for playing these kinds of games with online retailers like Amazon. The bottom line, however, is that the tax is being evaded, the states need the money, and the online retailers are the biggest targets. It's them or you.

What most people online are complaining about is the requirement that they comply with the law. There's a messianic fervor about the Internet that defies logic and practical considerations and those who preach the loudest are upset about having to play by meat-space rules. A good example of this was an interview this week on The Daily Show by the New York Times media desk editor, Bruce Headlam. Speaking about one of his messianic reporters:


"Brian urges all of us to embrace Twitter," Headlam said. "I encourage Brian to send his expenses to Twitter. That doesn't seem to have taken hold yet."

This is not just geek culture, or an inter-generational divide. The dark side of the Internet has real world consequences.  The taxation issue deepens our income divide, as those with education, money and access, including online access, continue to accumulate wealth at the expense of those without it.

Whatever scheme we can come up with to collect lost sales tax is one more step towards a level playing field for brick and mortar retailers, and a re-funding of our cities, counties and states. It's not an enormous amount of money, but it's a step in the right direction. Online retailers got a free pass in the early days, a kind of nod for fledgling e-commerce. Unfortunately, monsters were created and none is bigger than Amazon, destroyer of worlds and loser of a billion dollars of their own capital. But hey, it's an Internet company, we're willing to look the other way for a decade or so while the new world order manifests. It's time to level the playing field and make everyone play by the same rules. 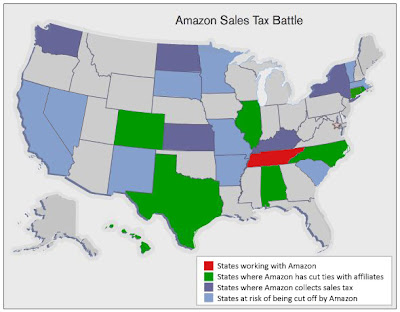