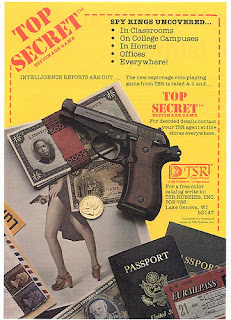 Each Summer I get the urge to hit the open road, which usually results in talking incessantly about cars. It's kind of in my blood from my childhood in Southern California. If your 12 year old has a subscription to Road & Track, you may be in for trouble down the road. Consider early financial counseling as a necessary intervention. 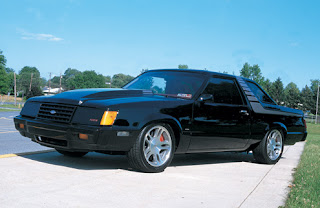 I think it started with Top Secret characters, and the horrible system of allowing players to buy anything they could find for sale. Road & Track was not just something you daydreamed about, it was a rules manual, with 0-60 times, top speeds, and cool automobile diagrams that were as gamy as anything put out at that time. The Auto Trader was our equipment list. Remember, we wouldn't be driving for another few years, so what did we know? Put a Corvette engine in a Ford Fairmont? Why not? Still, today I wouldn't consider driving a car that one of my Top Secret characters couldn't at least grudgingly accept as kinda cool. Sad? Immature? Absolutely. 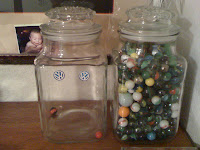 In my past life, the desire for a new car would result in something approaching instant gratification. Nowadays, it means saving money first, which I began to do recently with my trusty marble jars, used previously for paying down debt and now for saving up for a down payment. For every $100 I save, a marble is moved from the full jar to the empty jar. It's a visual reminder that I'm working towards a goal, making progress and need to be patient. I get my son involved too, to help teach the lesson I never quite grasped.

Then Saturday hit, so to speak. My wife's car was smashed pretty good by a hit and run driver. She was alright, as was my son, but by the next day, with everyone safe and sound, I was car shopping in earnest. Her car might be repairable, but, you know, it pays to do some research. With only four marbles in my jar, rather than the fifty I had set as a minimum, my day dreaming was given up for the sober reality that I would need to make a more spartan purchase.

The car would need to be new. I'm the kind of person that gets irritated with other peoples cars pretty easily, plus I meticulously care for my cars, which helps if I get them from day one. Otherwise I'm out there replacing trim pieces and repainting door panels.

I've given up on wagons, which was where I was headed last June. I don't think the family is getting any bigger and my son just gave up his car seat for a booster seat.  Factors like fuel economy play a bigger role, with the requirement that it has to be fun to drive. The magic engine for such things seems to be the turbo four cylinder, as much as I like to hype diesel. I looked at the new Buick (which I blogged about), can't stand the boy racer MazdaSpeed 3, and generally despise Japanese appliance cars like Honda or Toyota. After a while, the field narrowed to the Volkswagen GTI. 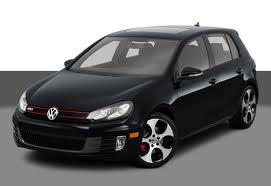 Yes, you probably had a cousin who had terrible problems with VW or perhaps you were burned. Personally I've had a couple of Jettas and they were fantastic and reliable. They were gateway drugs to harder German autos. Consumer Reports recommends the GTI and it's constantly on top 10 lists of all sorts, so perhaps their shaky reputation has been somewhat redeemed of late. So a base, four door GTI is what I'm waiting to buy if the the insurance company can get their butts moving and declare my wife's car dead or alive. I'm hoping for dead, despite my four marbles.