We all know generally what games are hot, but what about what game companies? Most fans don't care, but I've never actually crunched the numbers to check the relevance of the companies I deal with on a daily basis. The top 20 companies below comprise 75% of our sales. I can tell you that roughly half of what we buy only sells one copy, which shows tremendous diversity, but this 75% number consolidates "who makes what" to an extent I hadn't imagined. We deal with hundreds of companies, so 20 is a very small number. 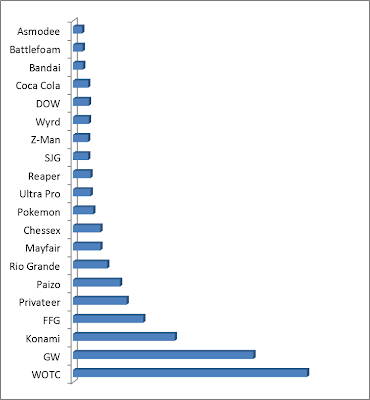 In the top tier, there is Wizards of the Coast and Games Workshop. We have special relationships with both of those top companies, as partner or premiere stores (or whatever WOTC calls us this month). I think my store would flat out fall down and fail without one of these companies and if both ran into trouble, comprising a third of my sales, there would be no doubt. Those two companies comprise more sales than the bottom 17 of this list.

For the second tier companies, like Konami and FFG, we have direct accounts and cordial relationships. I talk to people in those companies on a semi-regular basis. After that, things get a little murky. I know some of the people at Paizo, but there's no real business relationship available to retailers. Further down the chain, most companies we know only through their products and the occasional trade show meeting, or perhaps vague rumors of past eccentricities.

Notice that I included Coca Cola on the list, a company that outsells three of our top 20 game companies, including the likes of Bandai and Asmodee. I would like to draw some sort of lesson or benchmark from that fact, like, if when a company falls below the Coke Benchmark, perhaps some sales resuscitation is necessary.

Despite the Coke Benchmark, I still consider every one of these top 20 game companies to be key to our success and I seek out their products when I can't find them. In a sense, this is also a kind of game industry index of sorts, albeit one very specific to my business. It would behoove me to read the emails and follow the news of index companies more carefully than others. If they were publicly traded, I would have news alerts sent to my cell phone.
Posted by Gary Ray at Wednesday, June 08, 2011