Usually when I'm stressed I throw myself into my games. I still take care of business, but idle thoughts are easier to manage with a brush in my hand or an adventure to write. In my mid-twenties a couple of close friends died and I wrote two D&D eBooks in my free time. It was therapy, I suppose. My IT career, which was tedious, found me creating spectacular D&D campaigns and adventures, usually while I should have been doing something else. My wife has been sick lately, which is how I got into Flames of War. Now with the stress of the store move, it seems a great time to start a new game!

Warhammer Fantasy is calling to me. I've played the role playing game, which is fantastic. That led to my reading a couple fantasy novels as well, which I really enjoyed. I've played a couple of games of fantasy battles with other peoples models (OPM), which was enjoyable. Now with our new Mighty Empires campaign starting the first day in our new store, I'm very much tempted to start an army, despite not having any time.

The army that calls to me are the Ogre Kingdoms. Maybe it's a mental backlash against all those little Flames of War models, but I want to play something big, really big! Another advantage is that they're the German army of Warhammer Fantasy: very few high point value models. I would have to paint, obviously, but far fewer figures than say goblins. It's also fun to play a "Shock & Awe" army. When you put down those giant, powerful figures, there's no mistaking that there's going to be some pounding. I played Skaven when we had our Mordheim league (great game), and Ogre Kingdoms seem like the opposite of the sneaky hordes. 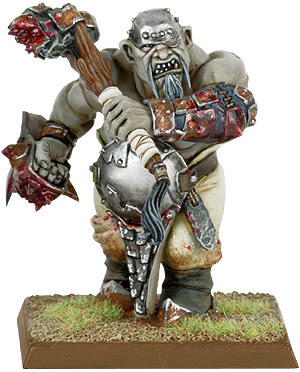