We took my two year old son, Rocco, to a couple of toy stores yesterday. As I had hoped, he spent most of his time with the product lines I had just ordered. Yes, I've been using him for market research.
When I realized the store needed to diversify, there were a number of mostly bad options. Video games, which we tried, just didn't feel right. I still can't figure out the business model for LAN gaming, it seems like the numbers don't add up. Straight games was all about diminishing returns. Comic books definitely wasn't it either.
We're doing comics in the new location, but only dabbling. The comics business is the most idiosyncratic, backwards, monopolistic one I can imagine and I wouldn't touch it if there wasn't such great demand for it. Why do magazines (including comics) come out on Wednesdays? Traditionally, the horses that pulled the ice wagons were free that day. And we just kept on doing it that way.
Toys was not exactly a shoe-in. I'm a game guy. I don't know jack about toys. However, I have a subject matter expert (SME) that I live with, and thus I have learned a lot about toys in the past couple of years. The first toy line I'm bringing in is one I tried to avoid, but eventually it seemed obvious: The Thomas Wooden Railway System. I literally wake up in the morning with Thomas. Occasionally I'll wake up on a Thomas that Rocco brought to bed with him the night before. He calls trains "foo-foos," and he literally can't get enough of them. Despite the lead paint issue, this is a solid gold product line that every two year old must have. It's sold at every worthy toy store and all know it as golden. It's the Dungeons & Dragons equivalent in the toy world; something you obviously carry if you want to be taken seriously (and make money). We're starting with about a third of the Thomas line, as well as a ton of compatible accessories from Melissa & Doug.
Below is the Thomas recycling center, a toy, I'm told that children don't really care for but some adults insist on buying 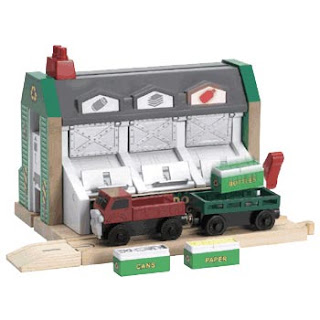 Along with Foo-Foo's we're getting racks of toy cars from ERTL. ERTL makes inexpensive, basic die-cast vehicles that young kids eat up: school buses, taxis, Hummers, muscle cars, airplanes, you name it. ERTL has been in business for decades making these things. They're in various scales and young kids could care less. Put a giant car on a tiny flatbad truck. Who cares?

Schleich is another company like RC2, who makes Thomas. Every store worth a darn has a bunch of this stuff, and I personally geek out over it. It's for older kids; Rocco doesn't care. They've got a line of medieval figures, fantasy, old-west, and animals.

The next level of toys we're bringing in are various science kits for older kids from the John Hansen folks. You can build a crystal radio, create slime or a volcano, or learn about the weather. Also from Hansen are those goo-gaws you just expect from a toy store: kazoos, frisbees, slinky's, etc. These are also the things that embarrass me with their kitsch.

Finally, we filled in our gaps with Melissa & Doug. This is one of those companies known mostly to mothers of small children. They make high quality, low cost toys that are practically ubiquitious. For us, we bought: doll houses, puppets, kitchen sets, puzzles, stuffed animals (Doo-Doos, as Rocco says), craft kits, train accessories, and much more. The M&D stuff I took mostly on faith, as I have no idea about what most kids play with. Luckily M&D offers to return anything that doesn't sell for you in exchange for stuff that does. We've tried some of it in the store already and it does alright.

So how does this work from a business perspective? We bring it in, try to figure out how best to merchandise and sell it, and then fine tune. Maybe the toy farm equipment does really poorly. Maybe there's a toy the Hispanic community digs on, as Concord is a quarter Hispanic (compared to the three guys who live in Walnut Creek). The hard parts will be: