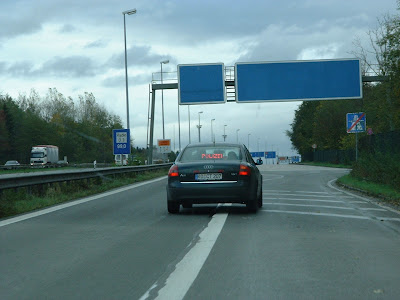 My first Euro Delivery trip was with my friend Jeff. He picked up his 330i in late October, 2001. This was only a few weeks after 9-11, and the police were on high alert. We were pulled over when we tried to drive over the German-Austrian border. They pulled us over again when we came back into the country from Austria. Unlike what I found in France, many Germans don't speak English, especially the police. There was a lot of pointing and gesturing and luckily we both had international drivers licenses.

I have to tell you, the level of goodwill from people in Germany and The Netherlands was astounding. They were all with us back then. That goodwill was long gone on subsequent trips. 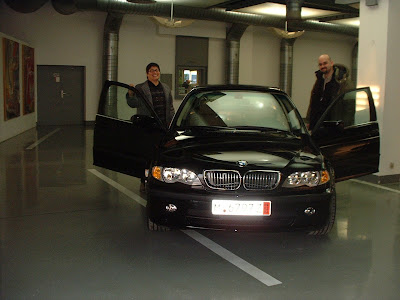 This was taken with my wife at the European Delivery Center in Munich. European Delivery is kind of interesting. It works like this: You order a standard US spec car (no exceptions), but rather than have it delivered to the dealership in the US, you go pick it up in Germany, drive it around for a while, and drop it off at a designated drop-off spot somewhere in Europe.They ship it to the US dealership for you. On my first trip we dropped off Jeff's car in Amsterdam (what happens in Amsterdam....). On this trip, we drove through France and dropped it off in Nice. BMW then exports it as a used car and saves some money. 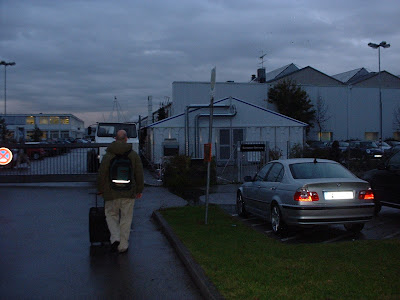 The list price for Euro Delivery is about 10% off. The real savings is in negotiating. BMW dealers get so many cars to sell each year, called their allotment. European Delivery cars come straight from the factory and don't come out of their allotment. This means it's free money for them. They're going to sell every one of their allotted cars, so there's no incentive to negotiate. On the ED car, it's free money. They make a thousand dollars for doing some paperwork. I saved about $7,000 on the 330i over list price. 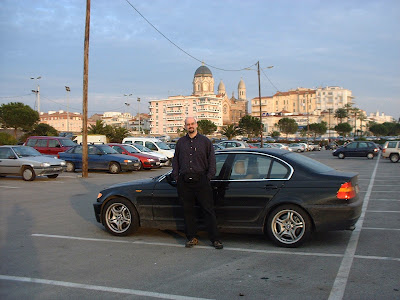 We just missed a January snow storm when I picked up the car in Munich. This was kind of important, because the 330i had summer performance tires. It would have been useless in the snow. There was still snow on the ground when I drove it out of Germany and we headed south to warmer areas of France. 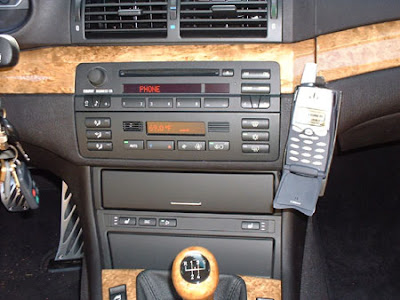 You can see my fancy birch trim, available only in Europe. I was a phone kit fiend, I always had to have my phone wired through the stereo system. The Dodge Magnum had Bluetooth and could accept voice commands to make calls. Very cool. Very expensive and unnecessary for the most part. 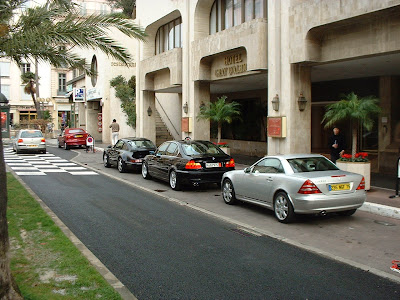 Our incredibly overpriced 4-star hotel in Nice. I remember paying something like $14 for a ham sandwich that made me sick. They parked the 330i in front. By European standards, this was a pretty fancy, high performance car, especially in France. 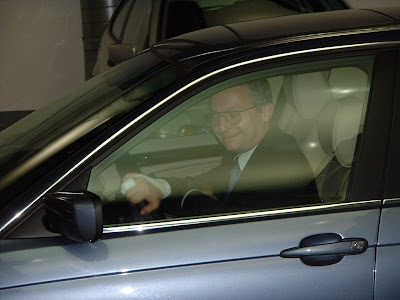 "Shoot them. Shoot them both." Major Toht, Raiders of the Lost Ark
He's even got the bandaged hand!
Posted by Gary Ray at Sunday, December 09, 2007