A customer came in the other day asking for a Nintendo Wii. I told her we don't sell anything electronic. She proceeded to ask, with a confused look on her face, "Well, how do your games work?"

It took all my efforts not to turn into comic book guy from The Simpsons. I swear that sometimes I see my days numbered in this profession, not from lack of money or capital, but terminal loss of patience with customers. One day I think my patience may go away forever, leaving me a jaded shell of a gamer. Luckily, there's an easy solution. It's called January.

Some game store owners like to put a spin on this. Rather than a negative, they'll say "We sell social games." I would find this highly offensive as a customer. To me, "We sell social games" is telling me that I'm some sort of Neanderthal or dork. It's a big can of worms, perhaps a glass house even, as most tabletop gamers at least dabble in electronic games. Many have gone over to the binary side and haven't returned. Role-playing games may never be the same.

I don't personally consider electronic games social games, although the Wii seems like it might have crossed over. I do consider electronic games a monumental waste of time, devoid of value compared to tabletop gaming. At least in tabletop gaming I get to see my friends. It's not always a productive gaming session, but at least you're socializing.

You know you've turned some kind of societal corner when mothers come in hoping to get their sons into Dungeons & Dragons so they can get them away from the corrupting influence of their computers. Twenty years ago it was just the opposite. Parents weren't entirely comfortable with little Johnny hacking the library computer with his 300 baud modem, alone in his bedroom, but at least computers were the future, right?

I can't say I've looked back and valued my time with an electronic game. I can say I wish I had the hours back in college playing Sim City or grad school playing Railroad Tycoon. The last good social electronic gaming experience I can recall was playing the Mattel hand held electronic football game in sixth grade. Anyway, even a bad D&D session is better than an evening alone with a computer game. I should know, I had a Sim City Societies addiction I had to feed this evening.

And finally, if you wondered why specialty game stores (what we call ourselves) don't sell electronic games, it's mostly about profit margin. The margin on an electronic game is 10%, compared to 40-50% for a specialty game. This means I have to sell five times as many electronic games as specialty games to make the same amount of money. That's five times the work. Granted, there are literally 100 times as many people who buy electronic games, but there are also vastly more stores selling them. The bottom line is that yes, we could sell them, but the business model is so different, the pace so accelerated, the inventory so transient, that it would monopolize our time and take over the store. They just don't seem compatible.

There is a good argument for selling used electronic games. The margin is much better, usually 50-75%, and you don't have to worry about new releases. We tried this in the old store. The down-side is that you're now dealing with the general public and the competition is fierce. We found it to be of marginal success, but it changed the flavor of the store. It's something best done in depressed regions of the country with small populations and low rents. I now see it as an act of desperation. These aren't the droids you're looking for... 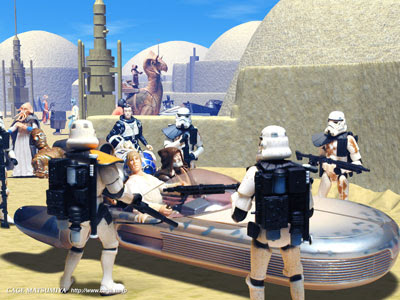