This post has nothing to do with games. Move along, nothing to see here.

I've always loved cars. Growing up in Southern California, I was fascinated with not only the freedom that a car provided, but also style and performance. My parents were not car people. They drove such well known favorites as the Ford Granada and Olds Cutlass. Maybe it was their lack of car style (aka family responsibility) that made me so fascinated with cars.

As a young teenager, I subscribed to Road & Track and would memorize 0-60 times of various cars. At the same time I was memorizing tables from the Dungeon Master's Guide, you know, just in case. Back then there wasn't a book of the month for D&D, you basically used the three you had, and you could get to the section you need blindly, flipping to the exact chart due to the wear of the book. When we played Top Secret, I would use the Auto Trader to buy my agents car. More often than not it was some implausible hybrid, like a Chrysler K Car with a Corvette engine.

I was hoping for a car for my birthday when I turned 18, but I got a computer, a supremely more practical and useful gift, but not the key to freedom (although possibly financial freedom later). It wasn't until I went off to college that I finally bought a car. The motivation was girls. I had all of $900, which bought you about nothing back then, much like it would now. My mother helped me with an addition $300 and I bought my first car, a 1970 Mercury Cougar XR7. The XR7 was the luxury model, I researched later. Nevertheless, luxury in 1970 didn't include such things as air conditioning, power windows, or brakes that could stop the car without sending it into a spin. It had the 351 Cleveland motor, a beast that straddled the small block-big block muscle car paradigm. I don't know what that means anymore, but it was fast, at least in a straight line. 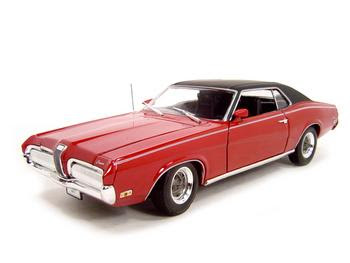 With no safety features and my 19 year old driving skills, this car was the most unsafe thing imaginable. If my parents only knew. I kept a fire extinguisher in the back seat. I went through three of them! Once I spun out in the rain and the gas from the rear tank splashed out and caught the back of the car on fire. I jumped out with my handy fire extinguisher, but forgot to put the car in park. Picture me with a fire extinguisher running after my slowly moving, on fire car as it trundles down the center divider. This kind of thing happened a lot. They were smart to have gotten me a computer.

Weekends occasionally found me in the junk yard, picking up replacement parts. This thing was crashed or broken so often, that I eventually replaced wheels, axles, doors, trim and various interior parts. Eventually I had it painted red from its original pea green. At the time it was three different colors, due to all the part replacements so it wasn't so unreasonable. I had this Vietnamese body shop guy named Hai. His response to my various repair requests:"Bondo, ten dolla." My girlfriend's father always frowned when he saw me drive it up and he scolded me for leaving oil stains on his driveway.

This car lasted me eight years, all through college and grad school. I went to interview for my first real job after grad school, an IT technician position. The Cougar overheated in the parking lot and when I tried to fix it, the radiator cap flew off, lost forever. I got the job, took the offer letter and immediately drove the car to the Pontiac dealer. My negotiating tactics went like this: "Hi, I just got a job, here's a letter saying so. Can I get that red one over there? I have no money. A trade in? He he. It's that piece of crap out there on the street in the cloud of steam."

That night I went home in what I thought was a cool car: 1996 Pontiac Sunfire. Oh man was this thing sweet! It never spun out (not enough power). It had air conditioning. Anti-lock brakes? For pussies, but ok. This was the car that got me into the modern age, propelled 26 years into the automotive future. The first weekend, a friend and I went on a road trip to play miniature golf in Boise, Idaho. It was a place and activity picked at random. A road trip in the new car.

Despite all the great things about this car, it was a lemon. It had the engine rebuild in the first year. It had transmission related problems that nobody could fix and a laundry list of repairs. I sold it within about 18 months and lost a bunch of money. The next owner called me frantically on the phone. She took it to the dealer and they ran a history report.

The replacement was a 1997 Volkswagen Jetta. It is not a chick car. Just keep repeating that over and over until you believe it. My salesman taught me how to drive stick on this car. Being stalled in traffic comprises about half my memories of this solid vehicle. This car was the European car virus that got me hooked a number of years. It had personality in a way that didn't include flames in my rear view mirror. The design was so spartan and utilitarian. Everything seemed so purpose built. It was delusions of grandeur and thoughts of riches during the dot-com boom that propelled me forward to my next car. It's when I completely lost my mind. 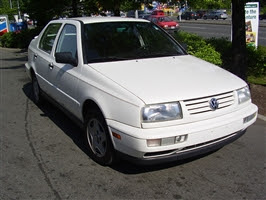 For two weeks I owned a black Lincoln Mark VII that my brother was fixing up for a loan shark. There was some sort of argument and I had to return this mafia staff car. Enough said about that one.

At my dot-com job we spent quite a bit of time fantasizing about what we would do with our stock option riches. This included surfing the Internet for dream cars. One morning, I woke up and groggily logged onto my computer and bought a car on eBay. Err, what? It was a BMW. In Canada. It was quite a bargain, supposedly, a 1997 BMW 540i for about half the price of a car in the US. This was for several reasons, one of which was that it was from Ottawa and had seen one too many winters.

My wife and I flew up to Seattle. The dealership managed all the export paperwork, drove the car over the border, and delivered it to us at the airport. Then we drove it down the coast, an amazing drive in the best car I've ever owned. This was a dream car, with a beefy engine, amazing handling, and these insanely great 16-way power comfort seats that either fit you like a glove or twisted your body in ways that made you sick to your stomach. Still, this remains my dream car.

Unfortunately, this car was insanely expensive to repair. I figured it cost about $1000/month while I owned it. Worse, it holds the record for leaving me stranded on the side of the road. No other car has simply not-worked for me more than this dream vehicle. You felt like James Bond driving it, but James Brown when you were ranting in the parking lot when it wouldn't start. It was great, but I wanted something better, preferably with a warranty.

The 540 was also the beginning of car as hobby for me. Special wheels, replacement of perfectly good parts, you know how that goes. I had a website that summarized how to do proper detailing using microfiber towels and polymer cleaners. Companies would send me sample towels to review. Geez did I need some focus. 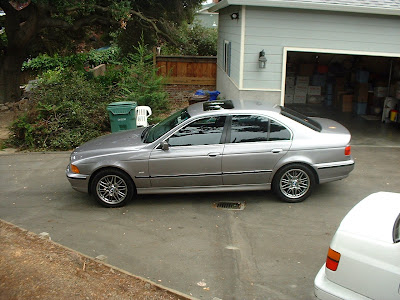 I went to Germany for the next car. I was learning that if I found bargains I could at least not lose tons of money when buying a car. BMW European Delivery saves a bunch of money, and I had a website explaining that too. The next car was a 2001 BMW 330i. My wife and I flew to Munich to pick it up. We did the full factory tour, saw the museum and picked up additional parts. A friend online from Deutschebank helped me order special interior birch trim from the local Munich dealership. We put it all together in the freezing parking lot of our hotel in France. Did I mention I didn't have a child at this time? 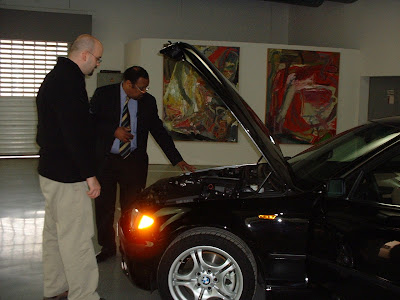 This was probably the pinnacle of car satisfaction, but there's always somewhere else to go. Eventually I grew tired of this beautiful Teutonic wonder. I think it was the head snapping manual transmission that eventually soured me on it. It didn't have the comfort of the 540i and I longed for something more coddling. I sold it without losing money, thanks to my Euro savings and moved on .... to Cleveland.

Again, too much time in IT surfing car web sites got me to buy the next dream vehicle. It wasn't quite out yet, but when it finally arrived, California dealers were gouging on prices, as they sometimes do. It was a 2005 Dodge Magnum RT. To beat the dealers, I ordered it from a dealership in Cleveland. I was going to a family reunion that Summer in Pennsylvania, so I timed it as a half-road trip; fly to Cleveland, go to Pennsylvania and drive back.

This car had style, power all the bells and whistles including navigation and satellite radio. Still, there was this yawning hole in my life that couldn't be filled by yet another car. My work sucked and I seriously didn't enjoy it. I spoke to relatives about my game store ideas at our family reunion. On the road trip I started visiting game stores across the country. After South Dakota it was settled and I cut part of the trip short to get back home to start planning. 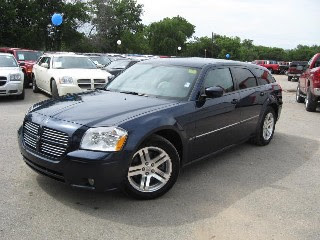 The new job sent me to Madison, Wisconsin, the game store Mecca, for training. That's where I wrote my business plan, or at least the first of many drafts. Over the next several months I sold the Magnum (too expensive), signed a property lease and left my job. The replacement car was another eBay special, a soulless appliance of a vehicle, a 1997 Acura TL 2.5. I hated this car for its mediocre performance and mushy handling. Luckily I didn't lose money when I dumped it a few months later. The only photo I have is one I snapped for the Auto Trader. Good riddance Acura. 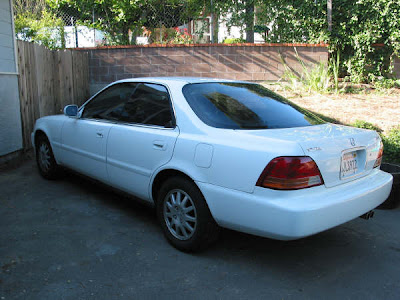 With a store and a baby, I was looking for something BMW-ish, with a low price tag, but with the utility of the Magnum. My current car, and the one I'm likely to drive until the wheels fall off, is a 2005 Mazda 6 SportWagon. This car is as BMWish as you can get with front-wheel drive and is usually packed with cases of Mexican Coke. It's also a great family car and the only wagon I know of that comes with a stick. I only had to go to San Diego to save money on this one. 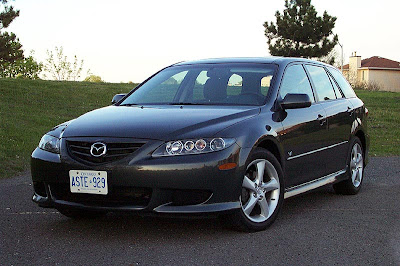