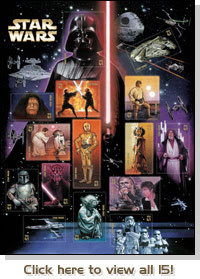 Mmm, so pretty. The post office had Yoda stamps for a while, and those were cool, but the new Star Wars collectors stamps are awesome. Not only do they have a variety of characters, but the stamp sizes are often unusual. The C3PO stamp is nearly three inches tall. What's also cool is that the print on them is a subtle gold, which you can barely see. They don't look like stamps and that is cool too. I'm not a collector, I just use them for office mail.

Each envelope gets a stamp based on the receiver. My evil credit card companies get all the empire figures, while those I feel help me in my business get the rebels, especially Jedi. C3PO goes to the most annoying receiver in the batch, despite being such a big (and thus cool) stamp. Boba Fett is the hard one. He's a bad guy technically, but he's a cool bad guy. I'm not about to waste him on the phone company. Maybe Games Workshop?
Posted by Gary Ray at Wednesday, February 20, 2008