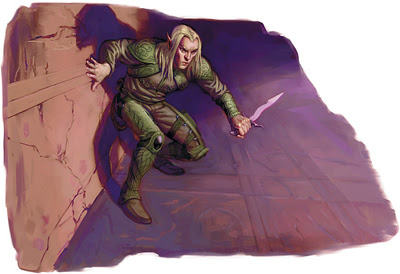 This is the first bit of "crunch" we've seen for D&D4. It was posted in the online version of Dragon by WOTC designer Bill Slavicsek. There's a more extensive writeup in (on?) Dragon.

"You look surprised to see me. If you’d been paying attention, you might still be alive."

Role: Striker. You dart in to attack, do massive damage, and then retreat to safety. You do best when teamed with a defender to flank enemies.
Power Source: Martial. Your talents depend on extensive training and constant practice, innate skill, and natural coordination.
Key Abilities: Dexterity, Strength, Charisma

This says a lot. The first thing that struck me were the hit points. First level characters are clearly built to be more resilient, which should help low level play. I decided in 3E that 1st level character play is no fun and all my future games would start higher. 4E appears to solve that. There's also a set hit point progression per level rather than rolling a die. This is better for organized play and it also takes out one of the stupider dice rolls in the game. Yes, rolling for your hit points is tradition, but it's a bad tradition, the RPG equivalent of female circumcision. I already allow my group to choose the average hit points rounded up rather than potentially nerfing their character with a poor hit point roll.

Weapon and armor proficiencies are greatly reduced, down from entire categories of available gear. It reminds me of previous editions. We'll see some additional proficiencies based on race and possibly some defaults. I think their goal is to create more iconic characters by limiting choice. We'll no longer see a rogue doing a sneak attack with his trusty quarterstaff (sorry Anders).

Skills reflect a lot of consolidation. Acrobatics includes the infamous tumble, along with often ignored balance and related skills. Stealth does the same. The key here is you no longer have to micromanage whether you want to choose between such things as Hide and Move Silently. You also don't have to choose between such iconic skill packages, all rogues get Acrobatics and Stealth, with the options mostly being in the flavor skills.

This adds flavor without nerfing the rogue. In the past, if you wanted a charismatic rogue, you often had to do without a core function, like Stealth or Acrobatics. "I'm sorry I can't scout ahead for you," says the social rogue, "I'm not that kind of rogue." The new skill method seems to establish a baseline character, rather than the open toolbox of previous editions. Some people will like it, others will feel "railroaded" in their choices. DM's can breath a sigh of relief, knowing that all rogues will be able to handle certain challenges.

This also goes back to the 4.0 design philosophy that no longer gives rogues a buttload of skill points in exchange for combat prowess. They get combat prowess equal to everyone elses (in their own way) and a normal selection of skills.

Here's the Enworld discussion link for this.

My answer to players who want a more diverse rogue: multiclass.