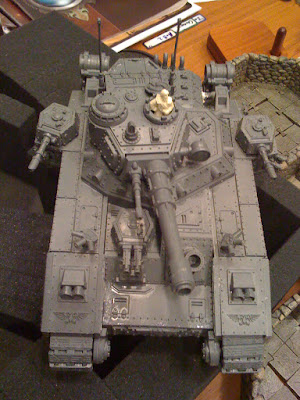 Building the baneblade took about 11 hours, including a lot of modifications to get it to fit properly. I'm not a good enough modeler to figure out bad instructions on the fly, but I am good enough to fix my mistakes. The biggest problem was the first step, where the instructions tell you to glue the front wheel assembly to the frame. This is a mistake that will prevent the two sides from seating properly against the center section. This tank has issues, but I've put so much time into it and fixed so many problems that I now have a personal investment, enough to keep it rather than sell it off.

Credit. I had a strange conversation today with a Chase rep. I had applied for a third card from them for business use to replace the crappy Advanta card. Three cards seems like a lot, but it's not really. The first card is a personal card with a giant credit limit. I've had it for seven years and use it for the majority of my purchases. The second card is a new Amazon Chase card I got for the purpose of buying a book for free on Amazon one day. It has a low interest rate and a nice credit line, so I parked my medium term Advanta debt onto that one. The role of the third card I was applying for was for business use, so I could stop using my personal card.

The conversation had the Chase rep asking me several questions about my finances and income, usually unusual things, then talking frankly about how much credit overall they were willing to give me. That total amount included all three cards, and the rep allowed me to transfer credit limits between the three cards, including moving part of my personal credit line over to one of my business cards. It was refreshing and honest, a departure from the arcane nature of most banks, who either accept or deny you and then give you what seems an arbitrary amount of credit. This "credit crunch" has been an eye opener for me and I'll be avoiding using my personal credit in the future and work towards establishing more mature financing, like business lines of credit rather than credit cards.
Posted by Gary Ray at Friday, October 24, 2008