We're having a Reaper miniatures clearance sale for select models at 50% off. This is stuff that hasn't sold in a year or more; some in several years. I've also decided to stop carrying monsters. Monsters are a large part of the inventory but a tiny part of our sales. We're more than happy to special order models you want, usually with next day turnaround.

People just don't paint fantasy minis like they used to. We've seen a steady decline of around 20% each year since we opened, with sales less than half of where they were in 2005. Then again, our inventory has shrunk along the way, as I gave up on carrying the full line. I've been a little slow in reducing our Reaper inventory, mostly because as a fan, I couldn't imagine not having them. Other game stores made this move years ago and it wasn't like having the full line was giving us a competive advantage.

I think the decline is partly due to the decline of role-playing games (and the rise of WoW), which saw a similar decline over those years. With D&D 4 on the horizon, we held off on a larger Reaper reduction, in hopes of a mini painting revival that never came. The other reason for the decline of miniatures is the increased quality of pre-painted miniatures from Wizards of the Coast. With non-random packs coming out in future sets, this should accelerate that process. I know as my budget has shrunk and my time reduced, I'm always looking for the right pre-painted monster for my next game. I used to insist that every monster in my D&D campaign be a painted version of the exact creature. Not helping metal minis has been steady price increases over the years that make customers question the value of miniatures, especially monsters, which will ultimately be less useful and almost always cost more. The new Reaper line of lead based miniatures is due out soon, which should tackle some of the price issues.

Where metal miniatures do make sense is for characters. You're going to get a lot of hours of use out of a painted character model (unless you have a sadistic DM), but you'll need to be a dedicated long-time gamer to re-use that basilisk or medusa you spent hours painting. We'll continue to carry character models and bring in new ones as they're released (about once a month). We'll also continue to bring in other lines of character models for our "indie" miniature section. These tend to be more expensive, but if you're looking for something unusual for a RPG character, I think it's worth it. 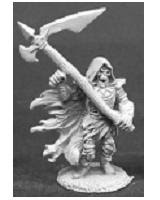