It has been a long time since we did our last ding & dent auction. We've got our next one scheduled for Saturday (sign up at 11:30am), the first in about five months. I want to go over how it works, since I consider these the shopping event of the year and we have a fairly low turnout. It perplexes me and I have to assume it's poor marketing on my part. The place would be packed if more people knew what we did. Also, we're likely to do them less regularly as we look for better avenues of selling these products, notably the plans for the online store in 2009.

Acquisition.
We buy up games from various manufacturers and distributors. These are of two sorts, unsellable games in mint condition and current games with various levels of damage. The unsellable stuff is usually a few years old and has run its course or just overstock of more than the manufacturer could possibly sell. This stuff is not worth full retail, or perhaps customers passed on a good game that wasn't a good value. Knock the price down 80-90% and suddenly you've got a bargain.

The damaged stuff is anything new you might see in a game store in various conditions. Games a distributor sends to a store can be refused and returned for even the slightest damage. The corner might be bent on a book or a board game might have a scratched cover. On the other hand, sometimes a whole case of games will get impaled with a forklift. It varies. Besides the damages that UPS inflicts on a game sent from the distributor, often the manufacturers shipments will also get damaged. In this case, the distributor does what retailers do and calls up and says they've got damages and don't want the items. In most cases, the manufacturer will just credit the distributor for the damages, provided there aren't too many. It's often too expensive to ship it back.

All of this unsellable "junk", often perfectly playable games with cosmetic damage, accumulates until a deal can be struck with some clever retailer who will liquidate this stuff at conventions, online and at auctions. I say clever because it's hard to do this. The costs involved depend a lot on geography, both shipping charges and your ability to store it somewhere. I'm perfectly happy to buy up a dozen or so damaged board games, but tell me you've got a thousand copies, and I'm out of the game. Midwestern game stores are perfectly located for both cheaper shipping and inexpensive storage, along with a better market of local conventions and just more gamers.

Your Selling. As a customer, you can bring in your games to sell for store credit. Store auctions are going to bring in a lower price than a national eBay auction, so bring in things you want to get rid of. Anything game related is good, even obscure stuff, as the most experienced gamers tend to attend these events. Why sell with us when you expect to get a low price? Consider it like the current housing market. Yes, you'll get a low price when you sell your house right now, but you're going to buy another low priced house in the same market conditions. This is an opportunity to generate some store credit to buy some of the other great buys at the auction. All auction sales are paid out in store credit.

The Prices. The starting bid for customer auctions is what they set it at, but we encourage a low bid price. As for ding & dent product, we buy up these games, no questions asked, whatever they send us, for about ten cents on the dollar, which we then would like to start bidding at twenty cents on the dollar. Sometimes we get large quantities we want to ditch fast and might sell a $50 boardgame at our cost, or $5 and maybe a buck or two extra for the shipping we had to pay. In other words, games, slightly blemished and in print, start at around 80-90% off. The level of damage also effects how we sell it. Those forklifted games that are still playable will likely go for 90% off, as will games we know have little local interest.

Also note that since we don't select these games and most game stores only have a subset of what's available based on local interest, you are likely to find a much broader variety of games at our auctions.

How We Do It. I'm a horrible introvert and the idea of a live auction sounds a little scary. The majority of the auctions are silent. A sea of items is sitting on our game tables with a sign up sheet next to it. You put down your number and your bid amount. Someone else can override you with their bid amount. You go back and forth like an online auction. The winner is the highest bidder. Sometimes there are multiple items, which takes some of the pressure off.

The live auction has you sitting in you seat with your numbered paddle (a paper plate) and raising your paddle when you want to bid. Live auctions are time consuming so we usually save the best items and customer items for this process. We try to make it fun and lively, with mini reviews from customers and staff as we pimp these games. It's a lot of fun.

Buy It Now Table. Here we have the larger quantities of items and perhaps stuff in the store that we want to discount and get rid of. You can just bring it to the front counter and pay for it, a sales table of sorts.

What Will We Have? No idea, only that there will be lots of it arriving sometime this week. Anything could show up: the hottest board game of the year, new Warhammer 40K models in the boxes, miniatures, boxes of cards, stuff we've never heard of, you name it. Customer often round out our selection with vintage games, including a lot of war games, fully or partially painted armies (I sold my Flames of War army at the last auction), and role playing games from decades ago.

Finally. If you've got a lot of stuff to sell, please come early, either when we open at 10am, or drop it off sometime during the week with instructions on your auction lots and minimum bids. 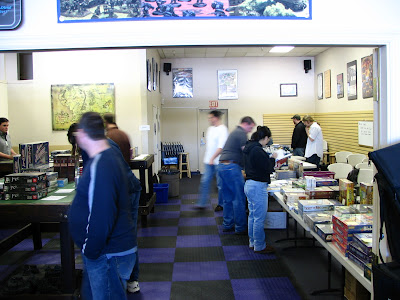