This week marks the beginning of Black Diamond Game's fifth year. I had to do the math on that several times, because I still can't believe its been that long. When I first wrote up the business plan and talked to a friend of mine, a potential investor, his main concern was not whether the plan was accurate, or if I could pull it off, his main concern was whether I could stick with it. Before the store, my longest time at a job was two years. IT rewarded such flighty behavior, but it's not an encouraging sign to non-IT people. It doesn't scream stability to investors, although I've learned since that one definition of an entrepreneur is someone incapable of working for someone else, by choice or temperament.

It's not only the beginning of year five, this week marks our one year anniversary in the new location. This last year was a lot like starting over, with many unknowns and a lot of initial expenses. In fact, it was a little harder because we were working without a net. Not only did we dig deep into our pockets to build the new store, without a lot in reserve, but the scale of the new store is beyond fixing if something big goes wrong or we simply miscalculated. For example, in the last store, the theory was that I could always go out and get an IT job and pay the store bills until things improved. The scale of Black Diamond Games 2.0 is beyond a single persons ability to support. Luckily we made it!

The big accomplishment for our first year was establishing Black Diamond Games as a community center. It was unclear whether this would work, considering we had spent three years as a store without that kind of support. It worked though, and I often say the game center has a life of its own, with an organic feel. People come and play a variety of different games, far more than I can keep track of. I'm proud of how it worked out, and of course we have much to improve upon. We need to reach out to the community a bit more. With higher sales will come more staff hours and hopefully things like classes and tutorials as structured store-run events. One weakness of volunteer labor is these kinds of nuts & bolts activities.

The makeup of what we do and sell has changed significantly between the old store and the new store. I was messing around with Excel when I accidentally came upon doughnut graphs, Excel insisted on telling me all about (luckily it wasn't a talking paper clip), plus I was hungry (ooooh, donuts!). Below is a doughnut graph showing the percentage of sales from September 2007 (inner circle) with September 2008 (outer circle). Both graphs chart our top 10 games. Just about everything is up significantly from last year, with leading Euro board game companies taking a hit. Euro sales are up too, but smaller companies, like Z-Man and Asmodee are making inroads. 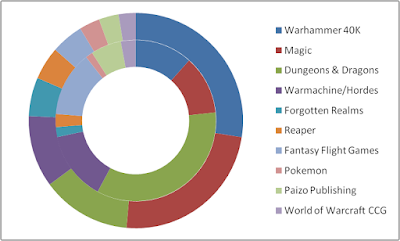