My D&D group is doing well in Keep on the Shadowfell. Although D&D 4 tries to make even 1st level adventuring fun, there's only so much excitement derived from knocking down goblins and skeletons. The party is now starting to move into more interesting encounters and you can tell there's more excitement. We just added two new excellent players to the group last night, James and Allen, who play a couple of pious dwarves from the mountains. 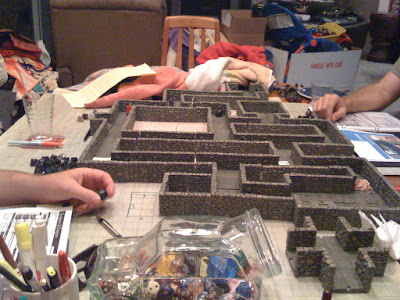 I haven't played 40K since before my trip to Wisconsin. I snagged a Baneblade from our ding & dent auction pile and started putting that together Saturday. The instructions for this model are not up to the usual GW standards and I found myself doing a lot of modifications to get things to fit. I've spent about 7 hours so far and I'm about three quarters finished. I'm not happy with what I've got so far, so I might finish it up and sell it at the store at cost so I can build another one. I really like the idea of the Baneblade, but the model is frustrating me. This model is for experienced modellers and apparently two chimeras, three hellhounds (including a Forge World and heavily modified version), and three basilisks wasn't enough experience.

The truth of my modeling career, now that I've gotten this far with my 40K army and I don't mind sharing, is that I was a frustrated modeler starting at 8 years old. Some people have a natural affinity with spatial dimensions. They're good with directions, physical movement and putting things together. I've got no such affinity and lack the most basic spatial skills. Sometimes I think I'm brain damaged with highly developed spatial coping skills. As a kid I muddled through organized sports, my love for martial arts (despite lacking much skill) and model building and I'm probably better for it, but a wiser person might have focused on other activities.

At 8 years old I recall buying a bomber plane model and attempting unsuccessfully to put it together in the dining room. There were tears, followed by my throwing that plane across the room, smashing it into the wall. It was a moment of modeling shame reinforced by a couple years of hiding the fact that I was buying Snap-Tite models instead of real models. You could get these at the local drug store back then, and I recall the shame of the purchase, as if I were buying condoms and Hustlers.

Nowadays most kids are so attached to video games that even a Snap-Tite kit would confuse them, but back then modeling was a common hobby. I recall a fairly large collection of mostly cars and trucks, but no planes after the dining room incident. So you can imagine I've got a little emotional baggage when I have trouble with a model like the Baneblade as an adult. There was a moment when I wanted to throw it against the dining room wall (or blow it up with M80's). 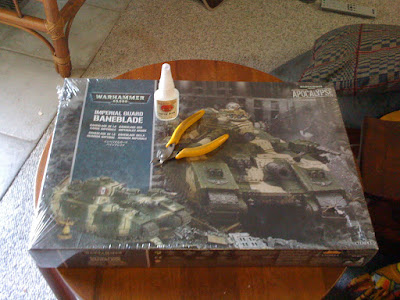 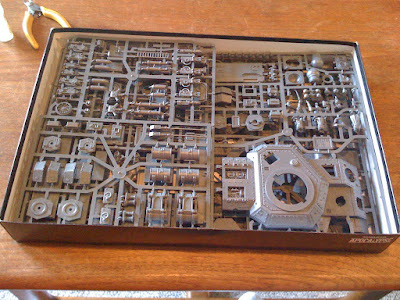 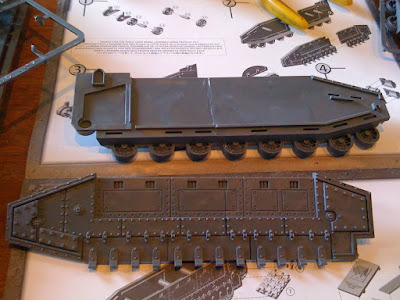 Finally, my three year old Rocco invited me to play Bendomino Jr. We don't normally play games, just play with toys, so I jumped at the opportunity to support his gaming interest. We played the game like a jigsaw puzzle, rather than using domino rules, but it was fun anyway. I look forward to playing many interesting games with him in the future.
Posted by Gary Ray at Monday, October 20, 2008