I tested the standard Citadel paints in the spray gun. Rather than go all out on the Baneblade, I tried it first on a sacrificial sentinel. Ever have one of those nightmare models that you have trouble assembling and you re-do over and over until it's a franken-model? This was that model for me and I never intended to get past assembly. I've got three other assembled and painted sentinels, which came later. This one got put on a shelf until I could think of something to do with it. Anyway, six months later and this model doesn't look that bad. Yeah, one of it's feet is glued on backwards, but that's nothing some basing couldn't hide.

So what was the result of the test? First, whoops, wrong color. Checking with the existing models, it should have been scab red (redder) rather than blood red (more orange). That was a close call. Also, because I didn't have enough scab red for a proper test, I couldn't get the right consistency. So far, it's too watery. I'll have to try it straight out of the bottle. Lack of the right color paint and the need for more propellant means I'll try again another day. I'm still hoping to hunt down tips on how to use standard paints in the gun. I know I needed to adjust the spray gun levels to get today's paint to work. 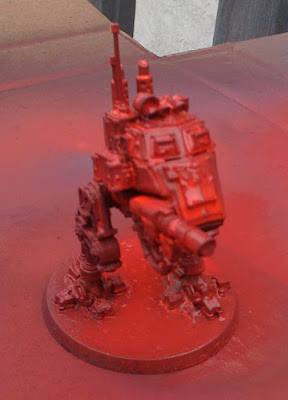 SATELLITE RECEIVER: The satellite radio receiver in the store died, only a year after getting it. I called XM and they informed me I would need to buy another one. I informed them that having to buy a $125 receiver every year doubles the cost of their service, so they should cancel it. I was forwarded to the closer. The closer is the person who talks you into staying with the service. They offered me a new receiver for $10. It's just like dealing with the credit card people.
Posted by Gary Ray at Saturday, November 08, 2008