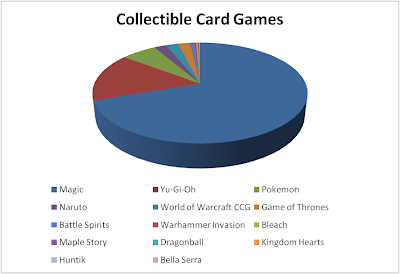 The "unassailable position" I talked about with Google, the iPod, and Microsoft Windows belongs to Magic: The Gathering in the game world.  There is nothing quite like it, except for maybe Chessex dice. At least that's what I see with our own statistics. It's painful, and damn expensive for me, to watch company after company throw themselves against the CCG wall in vain. In the store, we have an entire sub-culture of CCG wall throwers who hope in vain to find the Next Game.  I tried to add more data to see if I could show Magic as a leader, and not an unassailable winner, but nothing changed except the names at the bottom of the heap. Magic wins.

This is why I was (eventually) happy to see the Living Card Game model from Fantasy Flight Games. Stop banging your head against the CCG wall, the Magic wall, and create good games, sensibly distributed. You don't get to swing for the fence in the LCG model, but that means you don't necessarily strike out when you lose. Road kill from a year ago for us includes: Chaotic, Dinosaur Kings, and the last six card games listed here.