How Sales Are Different

Holiday sales have been strong for us this year, with a 15% increase from last December to date. Similar stories have been reported across the country, with talk of holiday sales returning to normal. I think that's an incomplete analysis, however. Sales for us are higher, but the shopping patterns are far different than in the past. What we see are more shoppers spending money with us, but they're far more discerning than in previous years. Remember that "flight to quality" discussion when it came to role-playing games? It went mainstream.

Since the October banking collapse last year, however, customers have learned recessionary shopping and changed their habits. But why not last year? Although we were still in a recession last December, the habits hadn't been developed. People either stopped shopping entirely, or shopped normally.

So the new shopping pattern finds more customers buying board games, since they've become more popular (they're excellent values), but buying only "top tier" games. We have a huge spike in the sales of these games, while secondary and tertiary games don't sell at all. Not even a little. Huh. We've been thinking about this from various angles as well. Perhaps we're influencing the experiment?

We've got much better staffing this season, with a dedicated person always available during busy periods to hand sell games, especially board games. This extra attention is of great benefit to the customer because we can direct them to appropriate games based on their criteria. Most people want to engage these games, but don't know where to start.

We've wondered if informing the customer actually spikes sales. Well, I know they do, but the question is how much of a spike. The alternative is a customer freed up to buy what looks good based on the box description, or most likely, without assistance, nothing at all. We certainly don't think that's the best method, nor do we want to be dishonest and sell based on stock levels.

Finally, I compared notes with other game retailers and several found similar patterns of "flight to quality." So I'm thinking it wasn't just us, but a fundamental change in mainstream retail that we're just experiencing now. Of course, mainstream stores have been suffering through it and gauging customers for a year now. In the long run, Despite very strong board game sales, I think what we'll be seeing is less selection at the store as our large board game inventory is pruned based on this "flight to quality." Some games can still rely on informed hobbyists with diverse tastes, but many others will need to go as that hobby market is saturated. It's just the new normal. 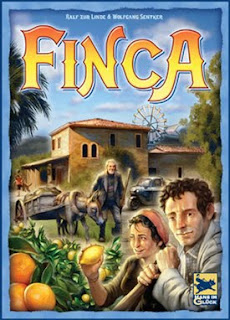 Finca's our best selling board game this season. It was a Spiel des Jahres runner up and featured game in the San Francisco Chronicle (we don't find SdJ winner Dominion "muggle' appropriate). It made many "geek" lists this year and is touted as one of this years best "gateway" or "bridge" games for new players.