The RPG market place is changing, transitioning from a print based model and trying to survive with a dwindling customer base. Print books are easy to steal, with the perception that role-playing book piracy is rampant. Selling print books is also hit and miss because of the nature of traditional role-playing games. With three to five players for every game master, player books, on the surface, sell three to five times better, making game master books less profitable. What actually happens is more complex, as there's often one guy who buys most of the books while the group borrows them. That guy is often the game master, the person with the most invested in the game. Trying to appeal to both markets in one supplemental book just makes for a bad book, so what to do?

Fantasy Flight Games has taken good games with broken distribution models and made them successful. They created the "living card game" or LCG, for The Game of Thrones, Call of Cthulhu and, created from the ground up to be an LCG, Warhammer Invasion. The CCG model only serves a few market leaders, while other companies attempt to eek out a living and not lose their shirt. The RPG industry, some would say, is broken. It serves a handful of top tier publishers, while everyone else has to keep their day job. It struggles with relevancy, competition from a compelling online RPG experience, theft of intellectual property and the inability to attract their target audience.

Warhammer Fantasy Roleplay 3rd edition, I think, is an attempt at a living role-playing game (LRPG). Gone are the book purchases that appeal to a segment of a tiny segment. Instead we have card packs, tokens and even special dice that aren't easily replicated, yet are very easy to expand the rules of the game. Much of the content of the cards in WFRP could have been placed in a rulebook instead, but that wasn't the intention. Easy expansion means easy rules changes and, most likely, more favorable sales. Want more spells or powers, forget books, sell a small pack of cards that every group will buy.

The premise, I think, is that there is always going to be that one guy who buys the stuff. The enigma of the starter box supports this. It's a box that has limited value for a player, but the players need it to play. At $100, it's unlikely more than one person in a group will buy it. It's aimed at that one guy. This is like the trade-off with the LCG model. In the LCG model, your sales will be far lower than a CCG model, but the publishing risks are far less and the efficiency in the system is much higher for retailers and distributors. FFG is accepting that the one guy will drive the sales of this game, and everyone else is not their target audience, except in driving that one guy to make the purchase.

The other method of creating a living role-playing game is the Wizards of the Coast way. You create quality online tools that are essential to play, that may even come very close to replacing the book model entirely. It's a fine line, as game publishers desire a print channel, so you don't want to eliminate brick and mortar (or even online) sales entirely, at least until electronic commerce is at parity with brick and mortar. The online model also seems to capture a lot of players, but again, there seems to be a lot of groups with one guy using the online service for the group.

The goal here in both models is to have a steady stream of income, with less volatile sales patterns. Cash flow is king, and the living role-playing game should provide steady cash. The down side is that only big companies can play this game. It takes a lot of resources to print cards and card stock efficiently, which is why we have a more mature market in board games rather than the free for all, kitchen table publishers in the RPG trade. The same is true with online tools, which require infrastructure and expertise that are out of reach of even the second tier RPG publishers.

For another day, the methods and reasons for publishers to kill off what has gone before. Why do they need to destroy, contractually limit or otherwise impede previous versions of their game? Is the player base that small? The almost irrational fear of piracy seems to indicate that. Is there no way for these games to live together? Can you force a customer to move on to a new version of an entertainment product? Not shown on my RPG chart of last week were sales of 2nd and 3rd edition used RPG products in our store. Each of these easily outsells second tier publishers. 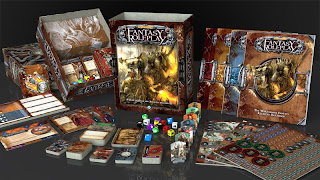 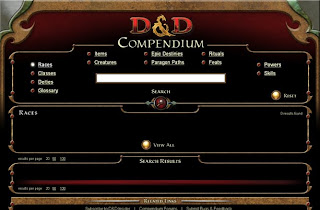 D&D Compendium. Search online for just about anything in print.

One of several solid online tools