More Pie for You (Miniatures)

Miniature game sales for us are down about 4% from a year ago. Again, we have a mature market with Warhammer 40K the clear leader. I would like to say there's a renaissance of new miniature games, but these are mostly curious games that play at the margins. Malifaux is sure to be a big hit (on the margins) in the next year, but for us it will probably just replace Infinity or another game. We'll also be dropping Lord of the Rings, which saw a short lived rally when the War of the Ring book was released. Firestorm Armada will likely pick up steam, only to dislodge Uncharted Seas. I don't want to play down these great games as games, they're just not terribly relevant from a sales perspective. What we need here, are new miniature players, which seem hard to come by.

New miniature players will be our focus for early 2010, as we implement a "little generals" league for kids. We'll be introducing them to the miniature gaming hobby through Warhammer 40K, and hopefully creating a time slot for them to play regularly. One of our failings as a game store is in the development of new gamers. The philosophy of "If you build it, they will come," is pretty good for a new store, but I think store owners needs to quickly find ways to engage the community. 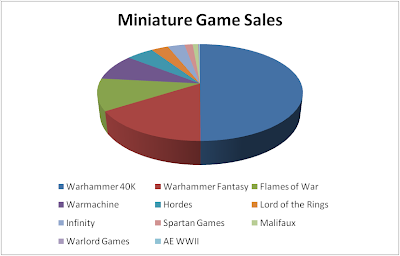