This is the month that game store owners have delusions of grandeur. December is a month of feast for most, while we worry about famine the rest of the time. Holiday sales are a pleasant drug with exhausting after effects. Strong sales have me thinking about the future. What do I want to do next? New fixtures? Maybe. Renovate my landlords bathrooms? Uh, no. One obvious expansion for my business is more inventory.*

I have a theory. It goes something like this: There is a certain inventory level of games after which point you have diminishing returns. There are only so many games in circulation, desired by a local community. After this point, you begin to see a decline in inventory movement, as the less desirable inventory sells less often, dragging down your average.

Diminishing returns assumes there's a performance baseline, and for the sake of argument, we'll say it's a modest three turns of inventory. My magic number for when you have diminishing returns is about $200,000 of inventory (retail), which should develop about $600,000/year in sales, using those three turns as a guideline. This is the optimal store size, provided you have a large enough community to support it. Any bigger than this and your inventory is under performing. Any lower than this and you have room for expansion.

If you have less than that amount of inventory, and most game stores do (probably less than half that), you can aspire to get more inventory and be comfortable knowing you have a future of strong sales. However, if you buy more than this magical point in space, you're bringing in under-performing inventory, and accepting that you'll have lower turns with a modest increase in sales. This concept is important because it sets an upper limit of efficiency on a game store. I'm not there yet, for sure, but it says that if you want to go beyond that magic number, you will be less efficient. The alternative is to buck the trend and turbo charge your turns, but that's another story.

This efficiency formula puts an upper limit on game store performance, which is how one might go about considering a second store, or some other form of expansion. Every retail niche probably has this magical formula, the "good" inventory value based on the accepted average turns. To be fair, most stores don't have the population base to support these level of sales, and my guess is most open a second store because they tap out their population base, rather than their inventory dollars. 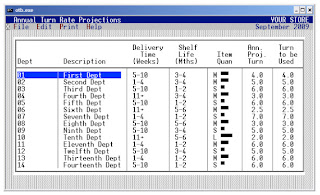 *When my delusions wear off, I'll be using holiday funds to pay off expansion debt.
Posted by Gary Ray at Saturday, December 12, 2009