Polyfabulum: (from Greek πολυ [poly, meaning many or several] and Latin fabulum [game]) is the practice, desire, or acceptance of playing more than one hobby game at a time. It can refer to the nature of a gaming relationship at a given time, or be used as a description of a philosophy of gaming, rather than a person's actual gaming status at a given moment.

The faithful filed into the grand temple, inspirational music playing as if from angels above. Artifacts of The Faith decorated the walls and brought comfort. The temple was clean and bright, made as inviting as possible. Without a trace of cynicism, the priest knew that theater was a large part of this production. There was a necessary sense of comfort and inclusion. Several young acolytes also watched on. He noticed a hint of a sneer from one of them. 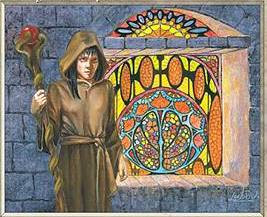 "What is wrong my son?" the priest asked.

"Friday worshippers." the young acolyte responded, as if that said it all.

"They're not true worshipers. How many have delved into the Books of Gygax or experienced the inspirational art of McVey? How many have puzzled out the Formulas of Knizia? Sure, we need their donations to keep the doors open, but they're not, well, of the faith. They come here once a week and do their rituals and think not of us at other times. They are monofabulum."

The old priest stiffened at the pejorative academic term. He thought back on his own past. His devotion to a single aspect of The Faith was what brought him here. Most of the trappings the acolyte spoke of were relatively new to the old man. When he was a boy, they hadn't existed yet. At first he was content with his simple, strong faith, but eventually the priest wanted a deeper experience, partly to connect with his flock. Back then, it was acolytes like these that inspired him to go further, to become a priest of the temple. His faith had been strong despite his sparse academic training.

"My son, they all participate at their level of comfort. They are all equal in The Faith. I am sure even The Great Gygax would have agreed." the priest explained. "Maybe there is an ancient table or chart we can consult."

"Perhaps." said the acolyte. "And there's always hope for change, as you say."