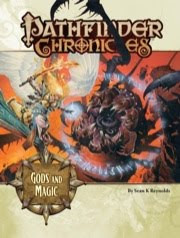 In preparation for a Pathfinder campaign, I've been reading Sean K. Reynold's Gods and Magic. This book is designed to be the pantheon for the Pathfinder world. Normally I find RPG religion books to be somewhat disappointing. The key with religion in fantasy games is they need to walk a fine line.

Religion needs to capture the essence of a faiths beliefs. It has to be realistic, yet coherent and accessible. Real world ancient religions encompass hundreds or thousands of years of adaptation and synthesis of clashing cultural ideas. They often don't correlate with our modern sensibilities. Anyone who has tried to create a pantheon for an RPG by reading real books knows that it's difficult to come up with a system that's both believable and that works in-game.

The standard D&D approach is a rather sterile affair, with simplistic gods with a portfolio, a preferred weapon, and some domains. There's little flavor or sense of realism as to why anyone would want to worship such a being other than the reward of raw power. It's an almost cynical approach to religion. Adding the necessary flavor isn't easy though without losing function. One of my favorite D20 books of all time is Book of the Righteous, by Aaron Loeb, a book on religion that attempts to balance usability with realism.

Book of the Righteous is a tome with very detailed information on every god in its pantheon, schisms in the faith, sample prayers, and even specialized holy orders. It's a fantastic book and I use it as my default pantheon for all my D&D campaigns. However, it's rather dense, and like a lot of books with too much information, the GM ends up reading it while the players just take your word for it. I love Book of the Righteous, but it's somewhat old school in its design philosophy, providing far too much information than necessary, as interesting and clever as it might be.

Gods and Magic strikes a balance. First, it's a small softcover book of 62 pages, compared to the 320 page tome that's Book of the Righteous. You honestly shouldn't expect much from this small book (also with a small $17.99 price tag), which is one reason why it's so surprisingly good. It's concise. Each god gets two pages, including artwork of their aspect and holy symbol. You get the usual game mechanics like spheres, alignment, favored weapons and how it fits in the Pathfinder world. An introduction explains the gods role in the pantheon and how they interact with their worshipers. Where we get a lot of creativity is in the church structure of each deity.

We're given information on how non-cleric worshipers participate, including druids, rangers, monks and paladins. Restrictions or allowances are thrown in. For example, certain armor may be worn by a class that might not normally be allowed and certain spells associated with the deity are available at a level lower. Each deity also has a low level signature spell to allow its clerics to add additional flavor to the game. Between the fluff and the mechanics, anyone playing a religious character is set to showcase their characters faith. There's more though.

Where this book really shines is tone. It walks the line of providing a clear pantheon, accessible to the game, without relying on clear cut answers that lose that sense of realism. Religion is vague by nature and one of the worst things a game book on religion can do is codify it to death so it feels like science. The gods are inscrutable for the most part, yet the writing gives us a feel for their place in the multiverse. There's a satisfactory calculated vagueness. The "Other Gods" chapter deals with a lot of realistic gods you might read in mythology, but wouldn't normally want to include in game.

For example, Alseta, the goddess of doorways is very much like the Roman Janus. Does your cleric really want to worship the god of doorways? Of new beginnings and endings? Not really, but adding this god provides flavor to the setting without attempting to shoehorn the real world into game mechanics.  This section also provides various evil gods that are really just adventure seeds for the DM and racial gods that add flavor but aren't intended for general worship (at least not in this book). I was also happy to see a "Cthulhu-esque" section on alien gods, important for sorcerers and always good for some reality twisting adventuring.

Gods and Magic is a fantastic edition to your 3.5 or Pathfinder shelf. I'm sticking with my Book of the Righteous pantheon, but man am I stealing the great ideas in this little book. It's a well designed, modern approach to religion in role-playing games, providing flavor in a useful and creative format and readily accessible game mechanics. That it's a great read with typical high quality Paizo artwork isn't a bad thing either.
Posted by Gary Ray at Thursday, March 25, 2010