Obtaining four turns of inventory was important to me, but in my head, I really didn't know what that looked like. I know a lot of stuff sells at one turn, and then there's a bunch of stuff over four turns to even that out, but how much of each? I spent a couple hours this morning crunching numbers and here's what I came up with: 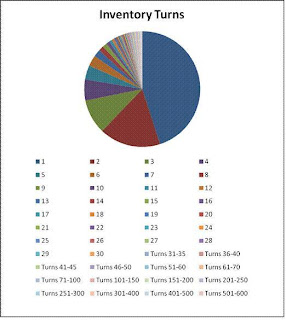 Items Sold: Single turn items comprised nearly half of all items sold last year. Items selling 2-4 times were another 25% and the final 25% were items selling over four times. That wasn't too surprising until I looked at sales dollars. 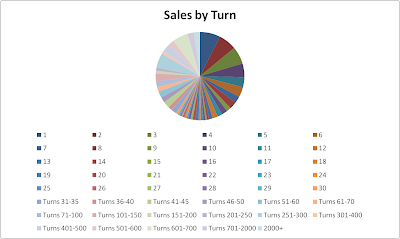 Revenue by Turns: Looking at revenue by turn rate was where I got a surprise. Turns of 1-4 were 75% of items sold, but only 25% of my revenue. Sales over 4 turns accounted for 75% of sales, while only 25% of what we carried. This turned my understanding of turns on its head. Yes, an average of 4 is a worthy goal, and most of what I sell will fall far under that turn rate, but the revenue comes from much higher turning items well above that threshold. In fact, about half of sales are from items with over 20 turns and a quarter of sales are from items over 100 turns. And don't forget the handful of items that sell well over 2,000 times each year, such as Mexican Coke, bottled water and Magic 2010 booster packs.

This is an industry that prides itself on product knowledge and carrying the exotic and hard to find. We carry more individual items than a Costco. However, half of what I sell is essentially window dressing, a "merchandising" expense to drive the high volume sales. Yet, what would happen if a specialty store dropped that 75% of below average merchandise? Is it desirable to cut back on those items? Surely you don't want single turn items cluttering up your store. How much do these 75% single turn items contribute to higher turn sales?  Why can't a big box store sweep down and absorb the 60% or so of sales that meet their turn threshold?
Posted by Gary Ray at Wednesday, March 24, 2010