The Yu-Gi-Oh duel terminals are so far performing to my expectations. It does seem to be our usual Sunday crowd spending most of the money, and as with Yu-Gi-Oh, primarily on Sunday. It's a funny anomaly of that game that we only sell Yu-Gi-Oh cards on the event day, as opposed to other products that sell all week long. I haven't noticed throngs of kids caravaning to the store from the ends of the Earth.

Placement of the machines has been the biggest issue. We have two and they need to be placed so each player can't see the screen of the other machine. Also, I can confirm that the machines are used primarily in pairs to "duel," against other players and not just to dispense cards. Adding to the placement difficulty is the touch screen and card scanners sensitivity to sunlight. Unlike a standard computer display, the touch screens cannot be exposed to direct sunlight or they go a bit bonkers, with flickering and the like.

Besides sunlight, one objective is to avoid creating unobserved spaces in the store to avoid any looting. Our Yu-Gi-Oh crowd is a fine group, but a general security rule is avoid providing temptations. Placing machines "back to back" just doesn't work with this in mind. We'll keep moving the machines around until we get it right. 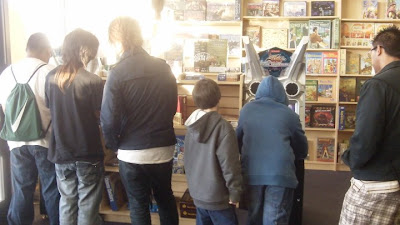 According to the City of Concord:

It is unlawful for minors to play the games during the following hours:
1. Between 7:00 a.m. and 2:30 p.m. on weekdays during the academic school year of the Mt. Diablo Unified School District, unless the weekday is a school holiday for the district;
2. ...After 10:00 p.m., Sunday through Thursday nights throughout the year;
3. After midnight on any Friday or Saturday throughout the year.