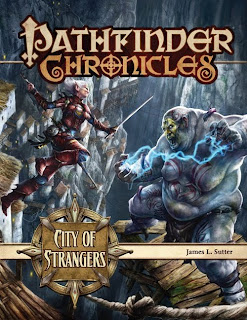 I really love city books. I've been running an urban campaign for ten years now and have drawn heavily on the best of what D20 has to offer: Ptolus, Hollowfaust, Freeport, Sharn and a bunch of others, including Karak Azgal from Warhammer Fantasy Roleplay 2E. I've written my own city guidebook for my home brew campaign, so I know city books are hard to write. There's a fine line between bland and believable and a freakin' three ring circus with sentient gorillas working at the corner store.  City of Strangers drew me in with its introductory narrative and cool interior artwork of a rampaging alien creature.

In the introduction, we learn that Kaer Maga is an ancient city founded by alien beings who feed on thought. The deal is that if they are fed live specimens, the rulers will gain access to their vast stores of knowledge. It was a perfect arrangement. The rulers had plenty of undesirables that were taking up space in prisons or dulling the blades of the executioners, and the caulborn, extraplanar thought eating freaks, needed food. All the troublesome folks were thrown into this large cauldron of a city to fend for themselves. They would thrive or they would be livestock. Those who lived would color the city with their heretical beliefs, indecent ways and abhorrent practices. The rest could enrich the aliens with their knowledge. It was a literal melting pot of ideas. So does the book live up to this awesome back story?

No. Well kinda.The history of Kaer Maga is very cool, but that's not what the book is about. Awww. Time has passed. The thought eaters are no longer around (the stats are available thankfully!), the cruel rulers have fled, and the people are fending for themselves quite well, thank you very much. Kaer Maga is about the misfits who have survived through the ages, and describing them is where the book excels.

The factions in the city are truly inspired, with some unusual elements we've seen before, like the role of mindless undead (Hollowfaust), the guardians of the undercity (Karak Azgal), but also some strangeness from real life. Some of the descriptions, like the Palace of the Child Goddess, sound like they're straight out of the back alleys of Kathmandu. The unusual cults and practices seem realistic. The place feels sordid and sketchy in a spooky kind of way, probably because it feels so real. Kaer Maga is messy, believable, and utterly cool! There just aren't aliens running around trying to suck your brain.

The coolness comes partially because it's a small city. That was a bold decision. I have to admit, it seems a lot bigger, but in the D&D world, a city size has game mechanic importance. A small city has advantages, as most NPCs are around 5th-7th level and there are more opportunities for low level characters. The effect magic has on the place is limited because of this. I think the 8,000 population should be more like 50,000, but then people would moan about the level spread and  the magic power level (call it 50,000 and use the 8,000 population stats). One up side to this low level approach is the city is more subtle and less fantastical than it could have been. If Ptolus is D&D with the volume turned up to 11, Kaer Maga has it turned up to a comfortable 5. There is cool stuff. It is accessible. You can usually be part of it.

Because it's such a low level, low population, anomaly, the author found an interesting model for everyone to get along. It's an "anarcho capitalist" society. Everyone has their agenda, but they all agree to get along, more or less, for the sake of commerce and mutual survival. Nobody is in charge, really, there's just a loose agreement on common goals. The freemen are welcome to buy up and free the slaves, but not interrupt commerce with their sketchy beliefs in freedom. The burbclaves of Widdershins are welcome to maintain order through oppression, if that's what they want in their tidy bit of the city. The district of Ankar Te may embrace necromancy in any way they see fit, including combining it with their brothels.

There are monsters living in the city, but they lead subtle lives behind the scenes, rather than wandering the streets and integrating with society, like sentient gorilla clerks. The only thing truly frowned upon is being judgemental and disruptive. It's actually very cool and that small city, low level issue, which I initially hated, is why I think it works.

A couple complaints: The most obvious flaw in this book is the lack of a good map. This city is vertical, not horizontal. The various factions live in the thick outer walls, building them upwards, while the common areas are in the open center of the city. This is very Sharn like, with a lot of city business happening indoors and the geography getting rather confused as you move from one interior place to another. Unfortunately, the map does not reflect this and there's no good artwork to give you a visualization of this very unique setup. It's a major failing that bugged me as I worked my way through the book. I really wanted a better representation.

Also, it's the Paizo way to give few concrete details in their Chronicles books. While a book like Ptolus might tell you something secret that could be a quick adventure hook at each location, City of Strangers just provides some basic overview. This is fine. I understand the approach. It just leaves me wanting more. As one customer put it, these could be player's guides for an adventure path. The books are almost safe enough to loan out this way.

So would I use it? The city is perfect for dumping at some crossroads of civilizations. You could start your campaign there, especially if your group can't agree on a culture or theme for the party. The city is eclectic, and your party can be too. It would also make a great side adventure location. There are some crazy things hidden under the city that I'm sure someone wants to retrieve. Overall, the book has grown on me and has me thinking about its subtleties. It's a fine addition to the Chronicles line and it has a place on my shelf with some urban giants.
Posted by Gary Ray at Wednesday, September 15, 2010