We're not planning to drop them, mostly because it's impossible to even evaluate them when they're in such a constant state of fail. However, it's awfully hard to take them seriously as a product line with a 50% fill rate. There are some serious problems here.

Prices have risen dramatically over the last couple of years, to where an average model has jumped from around $3.99 to $5.99. Before this, it probably took five years to get from $2.99 to $3.99. You may have noticed Games Workshop has dropped metal miniatures from their entire product range. Who wants to be in the middle of a commodity battle between Indonesia and China?  That's not where I would want my company. Metal miniatures are all about tin and tin is in short supply and high demand. Unfortunately, I don't think Reaper has much flexibility in picking their materials, unless it's some cheaper alloy, which they've messed around with in their P-65 line (lead alloy). They don't have vast quantities of anything that could be produced in plastic, for example.

There are cultural shifts too. Fewer people seem to be painting fewer miniatures, from what I can tell. They just don't get bought as often anymore, and I know many people eagerly awaiting the new Paizo plastic pre-paints to resume their miniature collecting without the butt pain of a tedious paint job. I could easily imagine the demise of paintable miniatures as a natural thing at this point. There is no game imperative to these things. They're just nice. Sure, there are things we could do to breathe life back into miniatures, such as table gimmicks to give players in the store in game bonuses for painted miniatures, or the good idea that never quite works how we want it, the painting contest. But really, does nobody want to do this for fun anymore?

I've gone from carrying every Reaper miniature in 2004 to just those 90 plus my wish list. This didn't happen by accident. It was a slow decline associated with the malaise in the RPG industry. During that time we went from six local game stores to just me. You would think we would see an uptick in mini sales then, right? Not so much. I'm sure some other store owner will tell me they're doing great with them right now. I can't say I'm hopeful, although I would jump on those 90 back ordered models if the opportunity presented itself. I even called Reaper to order some, but they were busy.

Our goal is to use Reaper packages to create a "core" selection of miniatures that we endeavor vigorously to keep in stock. Then we check the metrics on "core," and if they don't work (as happened with Flames of War) we drop it. If it does work (as has happened with Warmachine) we celebrate and engage further. Dropping Reaper is as inconceivable as Dungeons & Dragons not being top RPG dog. Oh wait.... 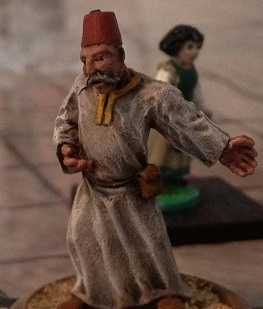 I'm far from a hater. The way I often make my RPG characters is to find the miniature first and use it for inspiration for a character concept. "Aziz," above is the Moroccan Merchant mini from Reaper's Chronoscope line. I rescued him from our clearance bins where he had been sitting for weeks. I vowed such a cool model would one day be my character (Inquisitor of Abadar in a Pathfinder Serpent Skull campaign, sometimes called "The Morsel of Abadar"). He then sat on my nightstand for months before I could figure out his concept. He's not a great model, probably better suited in an NPC role, and he doesn't have a great paint job, but it was extremely inspirational nonetheless.
Posted by Gary Ray at Saturday, November 05, 2011