We've spent over a thousand dollars attracting people to our Black Diamond Games Facebook page. Despite some early concerns, I do believe Facebook advertising is effective. Facebook has a problem, however, as businesses like mine are beginning to hit a saturation point. With close to 2,700 fans, we're seeing our rate of new people slow down quite a bit. It's still growing, but effectiveness of this type of advertising, getting new people, is diminishing. In fact, it may actually be to our benefit to weed out fans, especially those from out of the area. 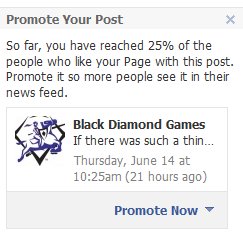 Facebook has come up with an ingenious method to continue to extract revenue from us. They've taken our fans hostage. Their justification, according to a Facebook employee, is this: with so many pages and groups and friends, there is no way Facebook could possibly show you everything everybody has to say. So instead, they've created a secret algorithm allowing you to see some of those feeds, sometimes. Never mind, that users could prune their communication, like I recently did, cutting down pages I followed from 650 to around 225, Facebook will do this for you.

So to reach those 2,700 fans, Facebook recommends I promote my posts by paying for them, from around $5 to $15 for each post. Such promotions do, in fact, work and suddenly that very low percentage of user interaction we've seen, thinking we were just being boring, jumps tremendously.

It also means those fans from out of the area, many of whom are very active, are now a liability. Don't go anywhere yet, but you could see where I wouldn't want to pay for them. They arrived organically, but when it comes to promotion of posts, I have no say in how Facebook targets our community. If I'm wrong about how this works, please let me know.

So is it ethical? Is it right? It's certainly effective to give in, as you can see below, although it means our cost for Facebook advertising has probably doubled. For us it will mean a shift of advertising dollars more towards Facebook and less for Google and our TV advertising. I hate to reward bad behavior, and I still avoid Yelp after their attempts at extortion, but Facebook really is a revolutionary way to reach our customers.

Edit: Here are instructions on how to get your posts back as a Facebooke user. 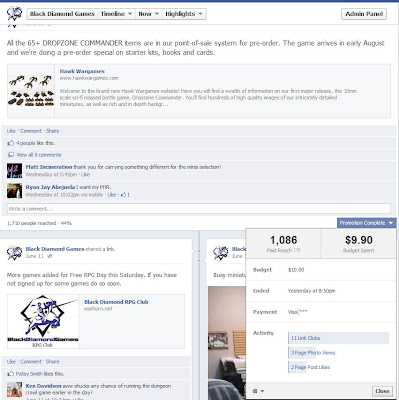