Free RPG Day was successful once again this year, but I wanted to confirm that with some numbers. We bought two kits, costing a total of $180. It may be free for our customers, but retailers pay for the kits. To determine success, we have to consider our profit margin. A conservative net profit margin I like to throw around is 5%. Most game stores are probably in the 5-8% range, but let's stick at the low end of the spectrum. 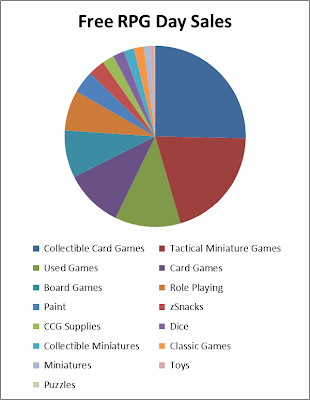 But was it all RPG sales? Of course not, and that's good. The thing about Free RPG Day is it brings in a particular type of customer, the alpha. Alpha gamers are cross departmental shoppers, so the day looked pretty normal as far as sales distribution, only it was far higher in volume thanks to the many visiting alphas. That might not be great news if you're an RPG publisher, but as a retailer, it's all good.

There are, of course, opportunity costs. An all day Saturday event takes up a critical time slot. A dead Saturday for us is considered a missed opportunity, so to have an event break even or not perform well is a real problem. We could have had a Magic tournament or something similar, so that could be factored into the cost of Free RPG Day, if you were looking to be overly critical. Still, it was a profitable day regardless.

Also don't forget that as a business, advertising expenses should be part of our cost of doing business. It's already built into that 5% profit margin, making it virtually free if it was properly budgeted. Retail stores, according to the experts, should spend between 2-4% of their gross on advertising, although few in the game trade do.

I have a heck of a time getting close to that 2% mark myself and I know most stores neglect this area almost entirely. I would suggest starting a budget with industry supporting events like this as the cornerstone. I generally detest anything sold to me as a "marketing expense," as it's usually code for "we can't figure out how to make money doing this," but in the case of Free RPG Day, it's legit.

As a store owner, I can say this event is successful for me. It might not work for everyone, but remember before dismissing it that it's not just an RPG event, and it's money that should be spent anyway. As for the publishers, they'll need to decide for themselves.