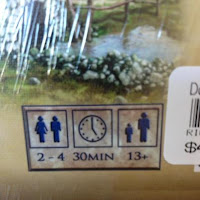 I sent a good friend to the store over the weekend to buy Dominion to play with his 8 year old son. He got upset and chided me about not knowing my own stock. Whatnow? The age recommendation on Dominon and all the expansions says 13+. Dominion suddenly got a lot harder to play.

I assured him it should be 8+ and sent him a boardgamegeek screenshot of the game summary being 8+ and the user recommended age of 10+. I mean, I'm not losing my mind, am I? He reluctantly bought the game and he and his 8 year old had a great time playing. End of story.

So what's the deal with the recommended age change on the box? 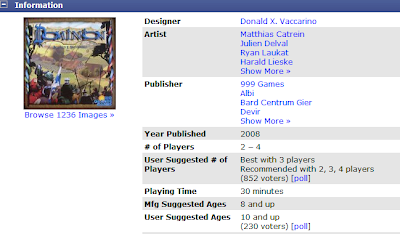 Asking around, the culprit appears to be CPSIA, the Consumer Product Safety Improvement Act. This is one of those laws that came about after the public outcry over lead in toys. The law was written in 2008, but the testing requirements were delayed until February of 2011. So now we're seeing the full effect of that law.

If you market games to children aged 12 and under, you've got a child's product, according to the act. You have to comply with lead, pthalate  and "mechanical" requirements, warning labels regarding small parts for 3 years old and younger kids, and most importantly, most devastatingly, expensive third-party testing.

It must be a good times to own a third party testing company. For example, testing blocks for a game costs about $500, but with 10 samples required, that cost goes up $5,000. That's just one component of one game, now multiply that number by each of your components and each of your games.

This will likely have several effects on the game trade:
That 13+ label has significance as it allows you to avoid a lot of this pain. If the manufacturers can manage to wiggle out of the children's product category, into the general category, their testing parameters are apparently less stringent.

Getting in the way of small business is the job of local government; perhaps it's a states rights issue. Like how my local county farm bureau taxes my point of sale machine or how this month the board of equalization collects an extra two weeks of sales tax to create the illusion the state budget has more than it does. Or how my city government demands permits and building requirements that aren't required by law.  Or warning signs regarding spray paint. Or video games. Or products containing lead. Or the sign requirement that I can't have signs. That's all local. Local government is to be avoided at every opportunity by small business, but the federal government? It's virtually invisible.

Politics aside, this does a huge disservice to the game trade. There are games that are clearly for children, dominated by big companies like Mattel, Hasbro and SpinMaster. The toy trade has a plethora of small game publishers, and this is a disaster for them. If you were a game designer, would you want to design a game for a 5-year old or a 13 year old? You might not have any economic choice in the matter now. Small toy companies are working to reform the law for small manufacturers.

For now, we'll have a low age range dominated by the giant corporate toy and game makers, an empty middle (tons of board games are designed for ages 8+or ages 10+), and most independent games in the 13+ category. That's a huge segment of the game trade that has just been nuked by this law.

Sure, games for ages 8-12 will still exist, but the end result will have been taking helpful labels and making them useless. It will be up to the parent to do the research for what's appropriate (which is unlikely to happen) or rely on store staff to override what the box says (virtually impossible, as was demonstrated). It also just made games far easier to buy online, since you can find the truth there. The law we're really discussing is the law of unintended consequences.
Posted by Gary Ray at Tuesday, June 12, 2012