I just finished reading Death's Heretic, a Pathfinder Tales novel by James Sutter. The usual experience of D&D fiction is you trade truly gripping story telling for the experience of immersion in your beloved game world. Story often takes a back seat to D&D style combat and rules compliant magic. In my experience, even good setting fiction tends to be just alright, rarely up to par with the top fantasy authors of the day. Death's Heretic was an exception, and it was because of the skillful writing.

James Sutter has a way with descriptions, which tend to be both concise yet vivid. His writing flows smoothly, whether we're following his main characters across the desert or across the planes of existence.

Death's Heretic is more intellectual than the average RPG novel, dealing with topics such as personal faith, mortality, and self actualization in an honest, adult manner that you don't normally find in this type of fantasy. It carries on the Paizo tradition of fearlessly tackling adult topics without worrying about some kids mom, the impression you get from more mainstream publishers.

Besides satisfying our intellectual curiosity about religion and the make up of the (Paizo) planes, the story is also a mystery, a burgeoning love affair between complex characters, and as mentioned, just stunningly well written descriptions. Fighting takes a back seat to all this, which is fine. When there is action, it's smooth and relatively easy to follow and is always used to move the story forward. There's no "sending in the ninjas" just to add some action.

As for delivering on setting exploration, which is why many of us read (slog through) these types of novels, Death's Heretic does an excellent job. The novel explores some of the desert kingdoms of the Inner Sea that don't get much attention, describing their various differences, whether it be geography or religious beliefs. There is quite a bit of plane hopping as our heroes uncover the mystery of a stolen soul. Paizo uses a modified "Great Wheel" planar cosmology and although I've read their planar book, The Great Beyond, this was my first experience with how that information might be applied.

So while the other Pathfinder Tales books are pretty good, Death's Heretic was an excellent novel and I look forward to seeing more from James Sutter, whether under a Paizo imprint or on his own. 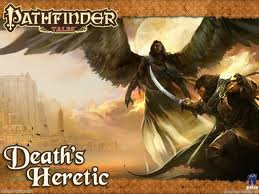